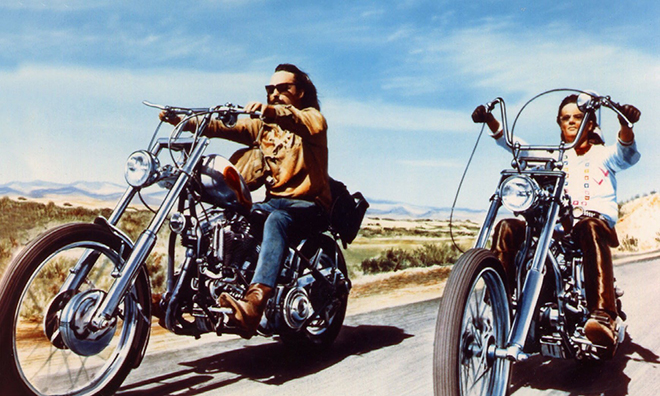 Dennis Hopper’s counter-cultural classic, Easy Rider, is not only emblematic of independent American cinema, but, released in 1969, is the definitive statement on the death of the 60s. Indeed, as this year’s darkly farcical presidential primaries currently threaten to plunge the US into a political and moral abyss, the timeliness of Criterion’s release of Hopper’s film cannot be overstated. And just as the current political crisis follows a presidency that traded on hope and progress, so to does Easy Rider reflect on its own era’s failed ambitions of individual freedom and free love.

Following a drug deal, Billy (Hopper) and Wyatt (Peter Fonda) set out on the highway, headed for Mardi Gras for the biggest score of their lives, in every sense of the word. Fonda imbues his Wyatt with a quiet melancholy that suggests he knows something is off, if only he could put his finger on it. His optimistic insistence, for example, that the starving, dysfunctional hippies in a commune they encounter “are gonna make it” rings hollow, despite his temptation to stay with the group and let Billy leave on his own. Meanwhile, Billy seems far more at home amongst the drugs and grubby sex, but for Wyatt the sense that time is out of joint can’t be shaken. Moreover, casting the son of Henry Fonda, past emblem of conventional American wholesomeness and Western individual liberty merely serves to widen the gulf between past idealism and present reality, and it’s that unhinged sense of time that is key to Easy Rider.

Zoetropic edits between scenes awkwardly shutter together otherwise distinct moments, creating a sense of unease and foreboding in what should be an easy-going adventure about the open road. The question of freedom strikes not merely at the heart of Billy and Wyatt’s own quest, but fundamentally at the failure of the American project: one in which individual freedom is held conceptually in the highest regard, but where practically it is curtailed at every juncture. Or, as Jack Nicholson’s show-stealing George Hanson puts it, “people’ll talk to you about individual freedom, but when they see a free individual, it’s gonna scare ’em”.

And indeed it does, as Billy and Wyatt’s mere appearances incite a brutal attack which leaves George dead, and the audience in no doubt of the health of ‘individual freedom’ in this vision of America. The pair do finally make it to Mardi Gras, but the reflective sheen of its carnivalesque, orgiastic promise has worn to a murky, distorted mirror. Its fitting culmination in a Kenneth Anger-esque drug-induced nightmare remains among the most disturbing scenes in cinema, not least for Wyatt, for whom the sequence represents his final admission of the decade’s broken promise. The night before Billy and Wyatt are gunned down by hateful, ignorant rednecks, Wyatt tells Billy “we’ve blown it”. With a vision as bleak as this, it’s difficult to disagree.

Easy Rider is released on blu-ray as part of the Criterion Collection in the UK.
Christopher Machell | @MagnificenTramp
Facebook
Twitter
Pinterest
LinkedIn
Go to mobile version