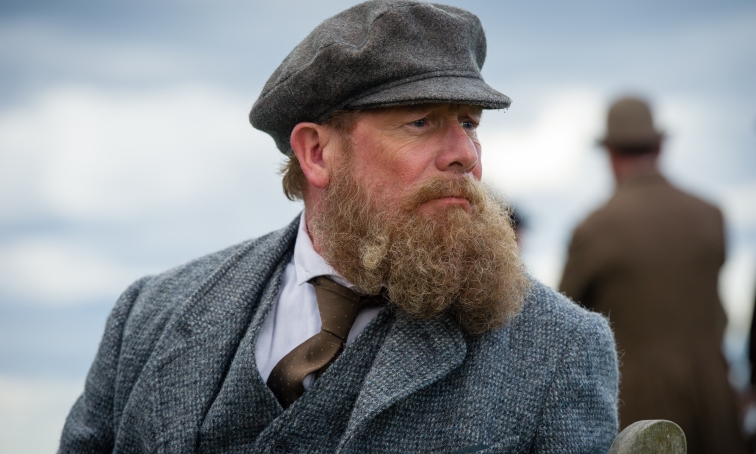 “There’s only one story you’ll get from me,” growls Peter Mullan from behind a hedgerow of coarse woolly beard. As Tom Morris in Tommy’s Honour, the veteran Scottish actor embodies the pioneering exploits of a St. Andrews man who inaugurated the Open Championship from his humble standing as greenkeeper and caddie to the club’s upper echelons. In designing courses and handcrafting clubs with the help of his sons, Morris paved the way for the sport of golf. However, the tale at hand offers more than mere sporting biopic.

An extended flashback book-ended by an interview given to The Times, it may be just one story, or indeed one man’s recollection of a story, but it is a multi-faceted, personal and affecting journey through a family’s life told with warmth, reverence and frequently wry humour by director Jason Connery. Further, it is an inspection of Victorian Britain’s rigid class system, stringent religious prejudice, and generational conflict, but above all the joys and conflict of a father’s relationship with his eldest son. Thus, the titular honour at stake falls at the feet of two men. Connery’s film belongs in equal part to the character of Tommy Morris Jr. thanks to an extremely impressive performance by up-and- comer Jack Lowden. If his father’s gift was creation and invention, his was making the Morris tools of the trade sing.

Possessed with the kind of talent, self-assurance and determination necessary to first take a few pennies off his best pals, Tommy goes on to matches on which rich English fuddy-duddy members bet. Sam Neill, sporting mutton chops to rival a younger Mullan’s, seeks to maintain the status quo and Old Tom duly serves his master. However, subservience doesn’t sit well with his son. With a desire to escape a lowly station in life, the initial stirrings of discord arise between father and son over aspirations of a career above and beyond the family business. Winning the Open three years in a row puts Tommy onto a path of fame, fortune and a collision course with cupid’s arrow. Struck down by Meg (Ophelia Lovibond), several years his senior and with a skeleton or two to hide, Tommy’s choice of wife doesn’t please officious matriarch Nancy (Therese Bradley).

To this day, Muirfield may close its doors to women but Connery affords the female members of his cast equal standing; a scene between mother and daughter-in- law is one dramatic high-point of a film whose ensemble cast is tremendous. Mullan, with features as weathered and rugged as any links course, is on perennially fine form but it is Lowden who really stamps his mark. Mischievous eyes that initially display boyish exuberance will latterly glaze over with bitter sorrow and the young actor’s dynamic turn is deeply moving. Though it may tell of one family’s story in the late nineteenth century, and the superb costume and period attention to detail are firmly rooted in its time and place, the case that Tommy’s Honour makes for breaking tradition, being true to oneself and challenging authority establishes thematic ties that are timeless.