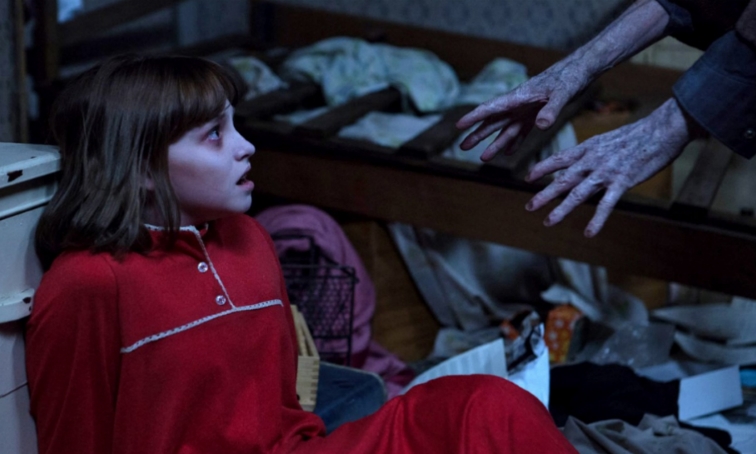 Based on one of the most famous poltergeist cases in the annals of paranormal investigation, The Conjuring 2 takes real-life ghostbusters Ed and Lorraine Warren (Patrick Wilson and Vera Farmiga) off to the outer rim of suburban London. From 1977 to 1979, a council house on a quiet street in Enfield was said to plagued by the ghost of an old man known as Bill Wilkins. The guy had snuffed it in his living room armchair a few years before, but wasn’t much happy about being deceased and kicked up a fuss.

The Enfield Haunting made national headlines, when police officers were called out to investigate and witnessed for themselves supposed supernatural phenomenon. At a whopping two hours and thirteen minutes, The Conjuring 2 could have been a bloated, unnecessarily padded out affair. But there is never a dull moment and no scene or sequence flags. Director James Wan has delivered what should rightfully be considered his masterpiece. There is a breadth and scale of ambition at work, which really tops anything he’s tried in the genre before. Most importantly: it’s a resounding success. Minor quibbles – mostly to do with the British family cast with stage school kids deploying Artful Dodger accents – remain exactly that. Of course, The Conjuring 2 is scary. Not just scary – it’s absolutely terrifying. Wan’s sequel isn’t all one-note shocks, either.

Chills range from hands-over-eyes and nail-biting to glued-to-the-chair-petrified. One nerve-shredder, involving Farmiga’s psychic, Lorraine, trapped inside an under-lit room with a comically eerie painting of a demonic nun (which comes to life) is a particular high point among many. Another key element is the casting of Farmiga and Wilson. The pair have chemistry to spare and their screen relationship is pitch perfect. Horror films are often guilty of being interested far too much in the mechanics of the fright or the aesthetic joys of the on-screen kill. Characters are treated as props, as meat puppets for the psycho killer’s knife. As with the Insidious movies, also by Wan, empathy with the folk being terrorised will make a film more emotionally involving. It’s hardly a new or radical idea, but so few horror directors attempt it.

‘Horror with a heart’ might sound a touch too Spielbergian, but like with any other genre or tale, it works far better when the viewer is invested in the material, beyond watching people die horribly. The Conjuring 2’s standout moment has nothing at all to do with putting the frighteners up the audience. As a spot of impromptu merriment, Ed sings Elvis’ timeless classic Can’t Help Falling in Love, aided by a perfectly tuned acoustic guitar that just so happened to be sitting there in the living room. The beleaguered family at the centre of the terror gather around him like they’re starring in a cheesy set-piece from a 1970s TV Christmas Special. A welcome lull in the storm of flying furniture and teacups, it’s an act of surreal charm, unexpected tenderness, its effect beautifully strange.