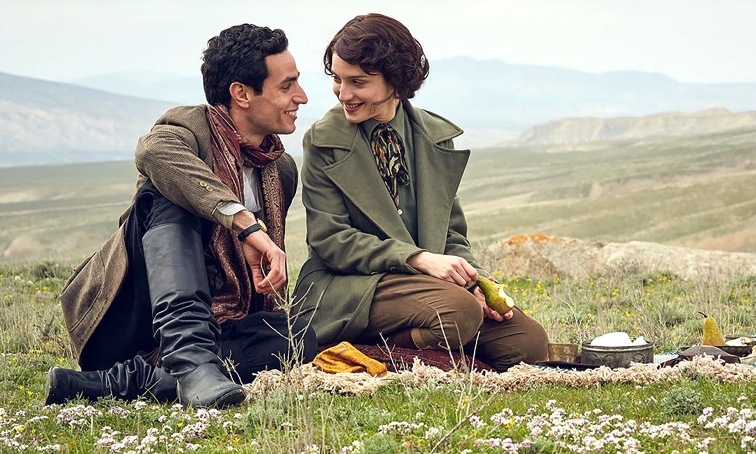 Ali and Nino marks an unexpected return to fiction filmmaking for Asif Kapadia. A tale of impossible love set against the backdrop of the First World War and the subsequent independence movement in Azerbaijan, Kapadia’s adaptation of Kurban Said’s pseudonymous classic is a film of tremendous beauty but very little heart. The film’s titular lovers are a sophisticated Azerbaijani boy named Ali (Adam Bakri) who “loves the simplicity of the desert” and Nino (María Valverde), a young Christian from Georgia. Their decision to marry is impaired by familial objections, cultural differences and the outbreak of the Great War.

Many of Ali’s friends and colleagues can’t wait to volunteer, seeing the war as an adventure to be savoured. Ali on the other hand can’t understand their desire to die in the name of the Russian Tsar and refuses to fight. However, he’s forced into combat when a secret admirer kidnaps Nino and tries to elope with her. Ali rides to her rescue, killing his rival in the ensuing scuffle and is forced to leave the city for fear of the violent retribution this murder will create. This is the first, but by no means the last time these star-crossed lovers will be separated, and what unfurls is a story of love torn apart by the violent will of men.

When the war arrives on the doorstep of Baku, Nino is sent to Tehran to lead a sheltered life while Ali ploughs headfirst into the independence movement. The film’s message is seemingly that if Ali had cared more about his wife’s liberation than his country’s, the tragic lives of these doomed lovers (and they’re clearly destined for tragedy from the outset) could have been prevented. But how can we expect Ali to change, when even his liberal-minded Muslim father refers to his wife in derogatory terms, claiming: “Her hips are too thin, like all Georgians” and that “A woman’s hips are more important than her intelligence.” Sadly, the feminist undertows of Kapadia’s latest offering get lost amongst all the action. Although DoP Gökhan Tiryaki captures the rugged beauty of the Caucus region, his camera sadly struggles to penetrate the internal suffering of the characters which populate these ornate landscapes.

Ali and Nino possesses all the trappings of an old-fashioned melodrama, a tale of beautiful lovers played out against a war-torn backdrop, replete with flawless pearly smiles. Sadly there’s a dramatic flatness to almost every scene and the heart of the film gets lost in Kapadia’s attempts to recreate the source materials quest for truth in a world of contradictory beliefs and traditions; a problem exacerbated by the decision to preform the film entirely in English, with much of the region’s culture rendered negligible by the incongruousness of the language and the Western prism the film is viewed through. Ultimately, a lack of peril and an inability to convey the tragedy of this fractured relationship tempers what is an otherwise beautifully made anti-war piece that commendably broaches the history of a country rarely explored in cinema.