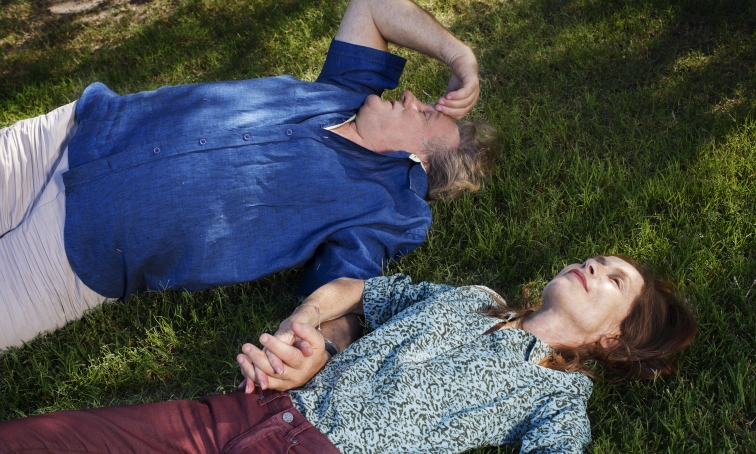 Rarely do we get treated to a moment so surprisingly amusing as the vision of Gérard Depardieu sporting a breezy, pineapple speckled button-up shirt and a baseball cap. It’s one of the precious moments of levity in Valley of Love that help to lift the spirits of this otherwise beautifully melancholic yarn of two parents, now separated, meeting in Death Valley at the request of their now-deceased son. Caps and pineapple print shirts, more sartorially American than French, are a few of the ways director Guillaume Nicloux shorthands the oddity and discomfort his leads experience as strangers in a strange land, in search of the unknown.

Michael is dead. Before taking his own life, he wrote his famous thespian parents, Isabelle (Huppert) and Gérard (Depardieu), to meet in Death Valley and follow a particular schedule of events. The trip would culminate in what he promised would be the final time all three of them would meet in person. Do they dare stay in the desert to find out if this is all real? The heartbreaking journey through not only their shared memories but also of their relationship with Michael makes Isabelle and Gérard’s time in Death Valley painfully illuminating. It’s a quiet grief that plagues them. They know their time in there is precious. They try to eke the meaning out of each event their ghostly son has planned for them, but waiting for the final spectacular moment is often painful for them too; a metaphor for life, if Nicloux has anything to say about it.

In reality, it’s been over thirty years since Huppert and Depardieu met onscreen (last seen in 1980’s Loulou). It’s a sincere pleasure to watch these heavy-hitting French actors come together and craft subtle performances. More importantly, its the layers of Valley of Love – that slowly reveal, then peel themselves back to expose more meaning – that are why this film is masterful. Early on, Isabelle and Gérard meet others at their hotel who reference their loved ones as being away at the moment, but they’ll be right back. It’s a soft jab at the very real absence of their son. Other times, they are too busy griping about Michael’s set schedule, their surroundings, or even their shared acidic history, to realize their son has brought them together in a place that almost too unbearable to live naturally.

Michael is silently asking them to find a way to live without him. Nicloux’s addition of magical realism (better left undiscussed here but it’s a genius philosophical layer in itself) only adds to the depths being plumbed. In death, you can find life. In life, you can find strength. In loss, you can simply find yourself. Those are the most important things Valley of Love expresses. Here is a film that metes out its meaning judiciously and expertly, albeit one that also sometimes it gets a bit tonally muddled or lingers on moments not worth lingering on. But that’s the great thing about Valley of Love: it’s a little messy, like life, but it’s also beautiful to experience.