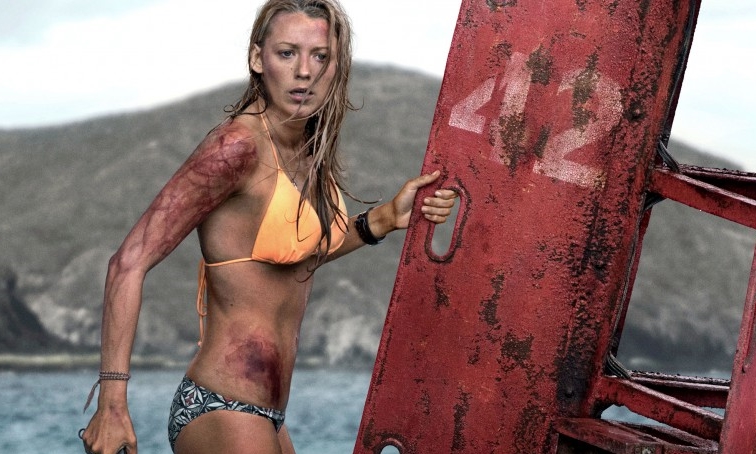 The monster is always a metaphor. Life, death, loss, grief, fears, desires. In Jaume Collet-Serra’s The Shallows, the extravagantly proportioned great white shark relentlessly stalking surfer-meal Nancy (Blake Lively) represents the raw power that is the grieving process. Heading down old Mexico way to visit a secluded beauty spot, where Nancy’s deceased mum chillaxed many moons ago, the American med school dropout wants to honour the dearly departed by hanging ten at the same place. It’s a way of maintaining a spiritual connection and family tradition. Anybody who has ever lost a loved one knows the sense of fear the prospect of fading memories can conjure.

It isn’t enough to have a keepsake, photo album or video footage. A memory is private and unique. Paddling out into the waves on a late afternoon – a bit of a rookie mistake, as it’s one of two daily periods when sharks are most active and on the hunt for a bite to eat – Nancy feels like she’s living a real-life Disney movie. Everything is beautiful and serene. There’s even a pod of dolphins frolicking nearby. Before singing the film’s praises, we mustn’t ignore the fact The Shallows demonises an endangered species of marine animal. It’s not the first and it won’t be the last, but it still needs addressing. You’re more likely to win a Darwin Award for ‘death by Pot Noodle’ than being eaten alive or chomped on by a great white shark, or any other shark.
Yet attacks, when they do happen, make great copy in the newspapers. Part of the problem is that, while The Shallows can get away with telling us ‘chill out dude, it’s only a movie’, and we’re far from dealing with Sharknado-like silliness, the verisimilitude of location and space is precisely what makes the film so effective. The setting and Nancy’s peril is very realistically portrayed, only the behaviour of the beast is fantastical. Assuming we consider the scene where she swims through a bloom of jellyfish to escape the briny jaws of death to be a credible and realistic moment.
Displaying an exemplary commitment to knuckle-biting tension, director Serra has made a riveting B-movie. Making clever use of sequences featuring a constantly bobbing and moving frame, either by placing the field of vision at water-level or moving the camera through bubbling seafoam just beneath the surface, it not only maximises the feelings of vulnerability, but also the state of terror. A needless cheesy coda, occasional lads’ mag drooling over Blake Lively’s hot bod – in one shot her ass literally glistens when sunlight catches beads of water – and unconvincing CGI aside, Serra’s eco-horror tale is fiendishly scary and brilliantly crafted.