Meryl Streep’s uncanny performance as Margaret Thatcher in The Iron Lady (2011) is almost certainly going to secure the US star a third Oscar at this year’s Academy Awards, but award-winner Charlize Theron will have every right to feel aggrieved after missing out on a Best Actress nod for her superb turn in Jason Reitman’s latest film, Young Adult (2011).

If asked who they thought the five best Hollywood actresses working today were, few people polled would realistically mention Theron. The Dior perfume ads and odd turkey – such as the godforsaken Aeon Flux (2005) – have seemingly distracted us from realising that the South African-born actress is an outstanding talent. If, by the time Young Adult’s credits roll, you don’t think that Theron is the best thing since tinned custard then you’re either sick, in heavy denial or you’ve choked to death on your overpriced popcorn.

Her role as serial killer Aileen Wuornos in Patty Jenkins’ Monster (2003) earned Theron a Best Actress statue and her turn as the sociopathic Mavis Gary in Reitman’s latest is arguably cut from the same cloth. Her Aileen was pure, poor white trash. The long years of sexual and substance abuse had left her bedraggled, bloated and psychically unappealing. Mavis is at the opposite end of the social spectrum; a well-off and well-educated ghost writer of a series of young adult novels who has gone to rack and ruin due to depression and a drink problem. Mavis can hide that she is damaged goods with a bag full of make-up and a hair extension, but on the inside, she is every bit as disturbed and monstrous as Aileen. 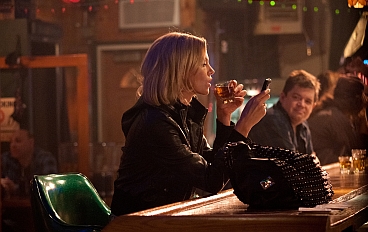 At least that’s one interpretation of the film’s protagonist. Another would be that Mavis is nothing more than a bored, spoilt brat who sets off on a quest to ensnare her ex-boyfriend Buddy Slade (Patrick Wilson) in order to shake off a bout of writer’s block. Her day-to-day life is dull and uninspiring, so she creates a drama out of thin air and then feeds off the chaos. All that she wants is enough inspiration to finish her book and it doesn’t matter to Mavis who she hurts or steps on in the process.

Young Adult is Reitman and screenwriter Diablo Cody’s second outing as a creative team after the hit comedy drama Juno (2007), and they have certainly justified the hype delivering a pitch black comedy that holds up a mirror to the modern, single woman. The film will unsettle certain viewers as they are bound to see shades of their own life in Mavis’ selfish and shallow existence where as others will be disappointed that the trailer gave the impression the film is a cross between Bad Teacher (2011) and Reitman’s previous film Up in the Air (2009), when it’s really more Fatal Attraction (1987) meets American Psycho (2000).

The man they still call Quentin Tarantino recently named Young Adult in his top films of 2011, and if that endorsement hasn’t tempted you to part with your money, then trust us – Theron’s ‘Patrick Bateman in lipstick’ is well worth the ticket price on its own.