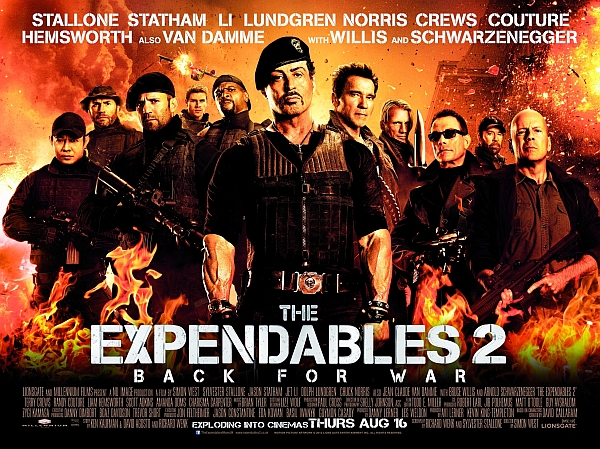 If you lapped up the first outing of Sylvester’s Stallone’s squad of Expendables then its sequel, the creatively titled The Expendables 2 (2012) won’t be much of a hard sell. Those who were disappointed with the original film might be tempted to give this one a miss – but that would be a grave mistake. Not only is part two superior to the inaugural 2010 effort, but it’s also one of the most diabolically entertaining action movies to hit cinemas this year.

The plot, which was probably written on the back of a cocktail napkin, is as simple as it gets. Barney Ross (Stallone) and his band of merry men are forced to pay their dues to Mr. Church (Willis) and bring back the mysterious contents of a safe from a crashed aircraft. Things don’t go according to plan, the shit hits the fan and the Expendables saddle up for another mission of bloody revenge. 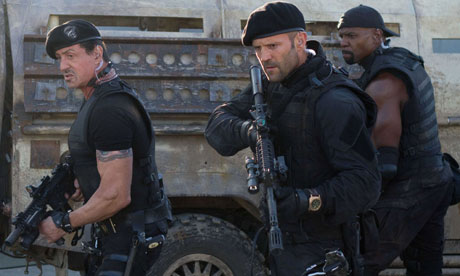 Any attempt to critique this film using a film studies textbook would be a futile exercise. The Expendables 2 is unlikely to be troubling Sight & Sound’s top film poll, nor does it aspire to. Both Stallone and Con Air (1997) director Simon West know their target audience and they deliver the goods accordingly. 80s action movie virgins can enjoy the visual spectacle, but those of us who know our Delta Force (1986) from our Die Hard (1988) will appreciate the picture on a whole other level. Furthermore, West’s film is riddled with references and in-jokes, and the affection shown by the old war horses for the genre that cemented their stardom is both joyous and touching.

The Expendables 2’s weaknesses are instantly forgiveable because, after all, we get to see Schwarzenegger, Willis and Stallone all in one movie. They feel like old friends and so you make allowances for them. You ignore Arnold’s rusty acting, you pretend not to notice when Stallone poorly delivers a ridiculous line of dialogue on purpose and you shrug your shoulders at Willis’ shrinking star power. The other Expendables play their part of course, with Statham watchable as ever and the new female edition to the team Nan Yu holding her own impressively. However, it’s Chuck Norris who steals the show with an inspired entrance and delivery.

You could criticise The Expendables 2 for being an excessively violent, mindless machine gun-fest with zero artistic merit, or equally praise it for the same reasons. Whatever your point of view, it may prove difficult for most to resist the charms of this fast and funny homage to the action movie gods.