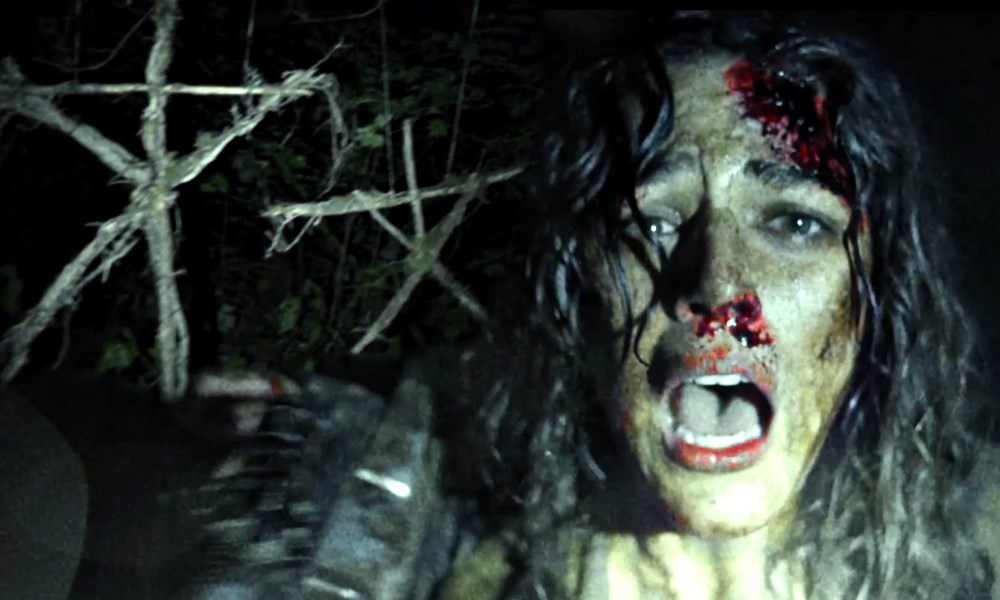 Just when you thought it was safe to go back into the woods… It’s been seventeen years since unprepared audiences were first scared witless by a camping trip in the forest near Burkittsville, Maryland. The Blair Witch Project redefined the genre map, charting a new path through unfamiliar territory. Since then, that path has been well trodden, to the point that found-footage horror is now more likely to be parodied than it is to petrify. Still, after popular genre updates The Guest and You’re Next, Adam Wingard seemed the ideal director to revitalise the format with Blair Witch.

He certainly has some ideas about to differentiate his film from those that have come before. Student filmmaker Lisa (Callie Hernandez) gets hold of some serious recording equipment meaning that each of the group of intrepid campers have mounted ear cameras, while static cameras and drone camera also make the trip into the wilderness. This allows for a far greater amount of cutting between perspectives on the action. This theoretically limits the amount of nauseating footage as terrified operators flail their camera around in the dark, though it also gives Wingard and editor Louis Colfi license to insert digital glitches with increasing abandon. It also usefully dispenses with the nagging question of why a particular character is still holding the camera and filming even in the direst of circumstances.

Those dire circumstances are, of course, what everyone is waiting for and Wingard has a few nice little touches up his sleeve to embellish on the stick shapes hanging from the trees motif. A confederate flag hanging in the flat of the two locals who take the heroes out into the woods gives an early unsettling note to the atmosphere and the multiple cameras allow more opportunities for the odd private conversation to sow the seeds of discord. Far more intriguing are a body horror element that is slowly revealed after a foot is cut while crossing a river, and the increasing suggestion of some sort of temporal anomaly could have fairly bleak consequences. With the unease rising Wingard expertly handles his jump scares with a heart-pounding first night in the woods before things really escalate.

The problem with all of this arguably comes down to the film’s title. These unnerving rivulets seem to be heading for a torrent that hints at some kind of malevolent forest; it wouldn’t be particularly surprisingly were it to be revealed that the trees were moving and repositioning themselves in the night in a The Haunting of Hill House scenario. Instead, though, this river can only run in one direction and that is back to the house from the original film. Nearly two decades on Wingard’s sequel feels as though it’s duty bound to ends up back in the basement staring at the same wall rather than battling through the bushes. Blair Witch isn’t nearly the same level of psychological horror as The Blair Witch Project, but it’s that film’s legacy that stops this becoming its own creature. Instead it’s an enjoyable jumpy imitation.