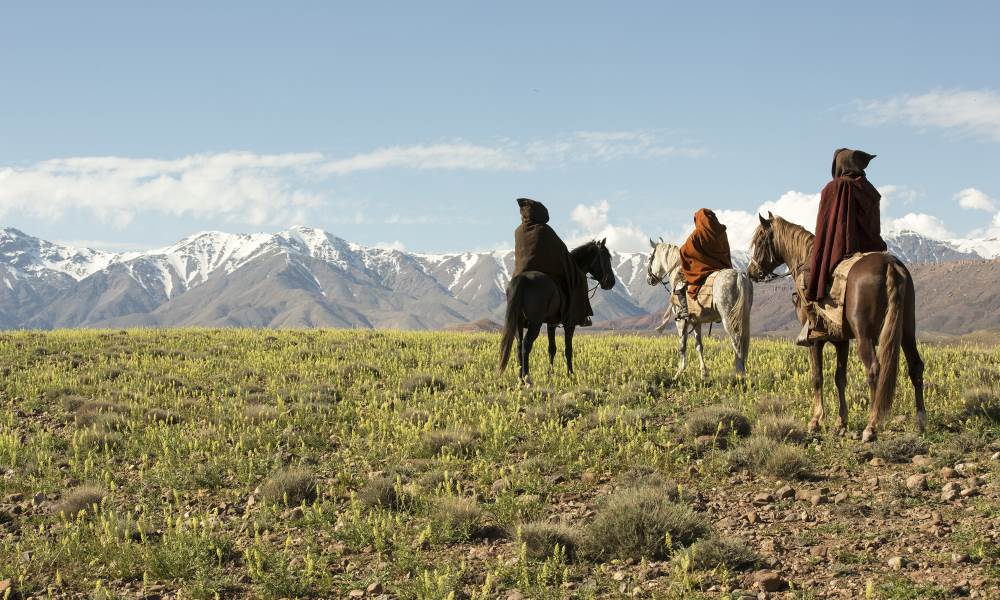 Ben Rivers’ The Sky Trembles and the Earth is Afraid and the Two Eyes Are Not Brothers began with behind-the-scenes footage from two films being shot in Morocco before a film director, played by Oliver Laxe, disappeared into the wilderness. The latter half may be pure fiction, but the first was compiled with footage from the shoot of Laxe’s own film, Mimosas. Strikingly similar to the Rivers film – both are simultaneously entrancing and inscrutable – it’s a sparse and ravishing meditation on faith.

Described by Laxe as a crypto-western, its narrative is primarily that of a quest. In medieval times, a dying sheik travels through the Atlas mountains with a caravan including two would-be thieves, Saïd (Saïd Aagli) and Ahmed (Ahmed Hammoud). Their destination is the city of Sijilmasa, where the sheikh would like his body to be laid to rest amongst his people. At the same time, in a sequence apparently set in the modern world, a clutch of taxi drivers harangue their boss for work only for him to give the strange, young, sermonising Shakib (Shakib Ben Omar) the job of helping the sheikh reach his destination. There is no explanation of how these two timeframes fit together, though there is more than one suggestion that Shakib is some form of prophet or angel – a Clarence in pursuit of his wings, with a ‘Don’t forget God’ sticker on his bumper.

“It’s hard for me, it’s my first time. I’m just a beginner,” he whines when he attempts to inspire faith in Ahmed are unsuccessful. The order of the film’s three chapters named after prayer positions seems to mirror Shakib’s difficulties but describing Ahmed’s commitment – their order goes ‘bowing’ to ‘standing’ rather than vice-versa. Indeed, the ‘standing’ chapter begins with a duplicitous and selfish act of treachery on Ahmed’s part that shows his disdain for the faith that Shakib is so committed to and believes will guide their path. They’re in severe need of it when they realise that they have lost their way.

Although the going is slow, audiences can revel in the staggering vistas that they are forced to navigate. For certain stretches Mimosas could be a landscape documentary were it not for the almost imperceptible donkeys making their way down a mountainside or through a valley. The land is glorious and forbidding and the soundtrack’s howling winds whip up and exacerbate the feeling of isolation, but onwards they plod. Quite what the destination will be remains a tantalising mystery but after the third chapter – ‘prostrating’ – veers into slightly more dramatic territory, there’s a transcendent quality to a closing shot of taxis speeding across the desert.