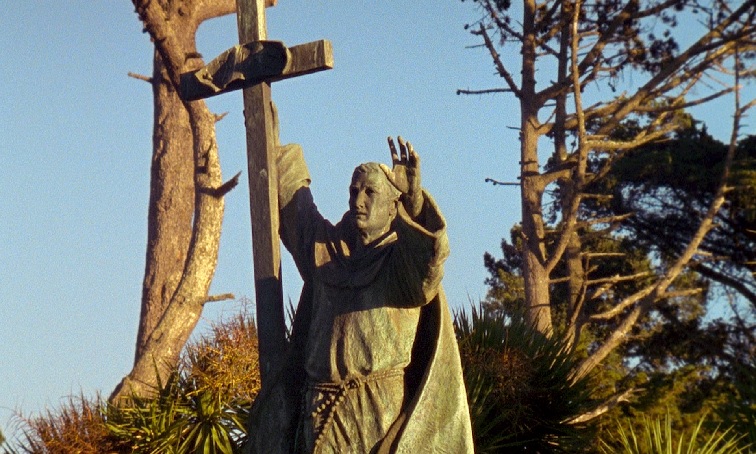 In her sophomore mid-length feature, The Royal Road, Jenni Olson refers to Alfred Hitchcock’s Vertigo as a “cinematic ode to nostalgia” – it would be redundant to search for an alternative, more apposite quote to describe Olson’s eclectic and poetic essay film itself. Cinema in its very nature is memory and Olson seeks to preserve in the “amber of celluloid” California as beautifully photographed in 16mm tableaux by her cinematographer Sophie Constantinou. The images are accompanied by the director’s ruminations on the flickering dreams of the silver screen, her own sexuality, a history of America’s invasion of Mexico and a road trip along the ‘El Camino Real’ that gives the film its title.

El Camino Real was a 600-mile path through California that connected almost two dozen missions in an area whose history takes in Spanish conquest, Mexican independence and American annexation. Olson’s own use for the trail is not quite so religious but no less a pilgrimage, driven by the desire to consummate a flirtation with Julieta who lives in L.A. while the filmmaker resides in San Francisco. Her own city was also the setting for her debut, The Joy of Life, which also blended psychogeography with personal narrative. The undulating landscapes are a perfect backdrop for the dangers and detours of the heart but it’s the past with which Olson has more concern on this occasion; and the act of looking back.

This leads her to digressions about the United States’ first ever war on foreign soil – the Mexican-American War – or to the treatment of California’s Native American populace at the hands of Spanish settlers. El Camino Real’s very name suggests the romanticising of what is in reality an ugly history, painting bloody turbulence as a “land of pioneers and visionaries; angels and saints”. These same insights are clearly paralleled as Olson’s steady, rhythmic voice-over recounts her own life experiences, the memories of women she has longed for, or films that have shaped her, seen through the rose-tinted spectacles of nostalgia.

“I’m utterly infatuated,” Olson admits. This would seem to be as much with place and past as specific person. “I’m always searching for something to make me feel better,” she says, “and quite often that is a girl.” Akin to Vertigo, however, which becomes entwined with Olson’s own voyage, the motivations are not so easily categorisable. The visuals are a string of uninhabited cityscapes – architectural, topographical – echoing El Camino Real’s current form as a procession of interconnected freeways transporting author and audience on a travelogue of desire. Love may be the ostensible destination, but all the more beguiling are Olson’s observations on “industrial beauty” or the notion that “unlike people, landscapes and buildings tend to endure for many generations”. Even as she challenges accepted mythologies, she crafts her own both warning against nostalgia and passionately arguing for it; both being seduced and seducing at once.

The Royal Road is available on Vimeo On Demand from 6 September.