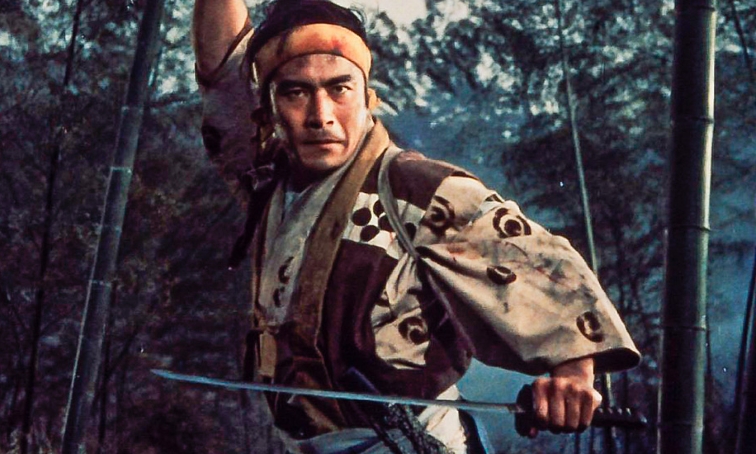 Sadly overlooked by western audiences, Hiroshi Inagaki’s superlative Samurai Trilogy is the definitive on screen depiction of legendary 17th-century swordsman Miyamoto Musashi. 1954’s Samurai I: Musashi Miyamoto begins with Takezo (Toshiro Mifune) losing the battle of Sekigahara with his friend Matahachi (Rentarô Mikuni) and on the run as a fugitive. Both men are brash and inexperienced, but where Matahachi is cowardly and lecherous, Takezo is full of inner turmoil, horribly aware of his inadequacies and lashing out at Matahachi and the women who shelter them after Sekigahara.

Mifune, the archetypal on-screen samurai, imbues his Takezo with nuanced internal conflict, self- loathing externalised with flailing violence and misdirected anger. In a scene that verges on the comic, a raging Takezo finds himself strung up by the infuriatingly composed Priest Takuan (Kurôemon Onoe), screaming blue murder and begging for execution in preference over his humiliation. Takezo’s tantrum is all adolescent, overcompensating posture, with Mifune’s physical talents perfectly capturing Takezo’s impotent fury. Samurai II: Duel at Ichijoji Temple, opens with a very a different Takezo, having now adopted his samurai name of Miyamoto Musashi and delivering a thrilling victory against a chain and sickle- wielding opponent. Despite his triumph, however, Musashi is disappointed when his master informs him that he has yet to master the samurai art: despite having contained his external anger, Musashi remains internally conflicted, supremely skilled but lacking in compassion and self reflection.

Musashi’s old companion, Matahachi, now finds himself married to the scheming woman who sheltered them after Sekigaraha, and Musashi’s turmoil continues to be driven by his longing for Otsu (Kaoru Yachigusa), whom he left behind at the end of Samurai I. Thrown into the mix is Kojiro Sasaki (Koji Tsurata), the historical swordsman with whom Musashi is destined to duel. Sasaki’s presence in the film is the key to the trilogy: neither villain nor ally, Sasaki is a distorted mirror of Musashi, both of whom seek mastery over the samurai way. But where Musashi desires inner peace, Sasaki lusts for dominance, two forces that drive them irresistibly towards each other. The ultimate exertion of these forces manifests in one of the best on-screen duels ever filmed, in the finale of Samurai III: Duel at Ganryu Island. There is arguably no finer example of characterisation expressed through action.

Musashi’s supreme control here is contrasted with his flailing panic in Samurai I, having finally learned to temper his strength with compassion; the camera reflects Musashi’s confidence with its still deliberation, moving only to track his movements. Using the sun, as legend dictates, to blind Sasaki, the thrill of Musashi’s victory is undercut by his lament that he will never again meet another swordsman as skilled as Sasaki. The moral value of Inagaki’s work is defined not by the fulfilment of individual agency, as it is with so many westerns and space operas, but of the harmony of internal life with external forces. Sasaki’s defeat is met not with triumph, but an understanding that there is no victory in destruction: a beautiful and unsentimental conclusion to a superlative work.