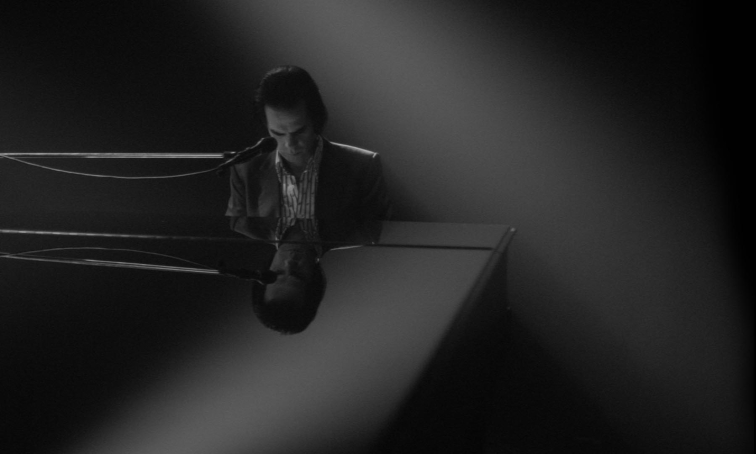 One More Time with Feeling is a music documentary in a minor key, a song sung about grief and loss and trying to carry on when you really do not want to carry on. Like Cave’s music, there is melancholy and honesty. Shot in an immersive and starkly beautiful black and white 3D, the movie is an emotionally resonant meditation on art and suffering. Directed by Andrew Dominik, whose film The Assassination of Jesse James by the Coward Robert Ford was scored by Cave and bandmate Warren Ellis, the ostensible motive is to record the making of the 16th Nick Cave & the Bad Seeds album The Skeleton Tree.

The first half-hour is slow going – much of it resembles B-roll. The crew get in the way; Cave is followed getting dressed, but then told to do it again as the film crew haven’t quite got what they wanted – though we don’t see the second take – and cameras are turned off and mics left on. This roughness creates an intimacy with the film’s subject: we’re hanging around as they hang around and with the black and white photography there’s the backstage feel of Don’t Look Back, though from the opposite emotional pole. Then the music comes in and the difference between Cave’s sonorous baritone and his softer speaking voice is immediately apparent. Simply put, Cave is someone who is stronger when he is singing. Likewise, the film becomes more cinematic at this point, creating essentially standalone footage of the songs, swooping through chinks in the studio wall to sail over the city.

A notoriously cagey interviewee, Cave struggles to express himself, occasionally unhappy with what he has said, conscious of the difficulty of talking about the trauma of his son’s death, but he opens up and continues trying. His poems and lyrics spoken in voiceover confront the subject more directly. “When did I become an object of pity,” he wonders after marvelling at how kind strangers were to him. It is the second half of the film with the entrance of his wife Suzy and son Earl that a more rounded image of the man becomes apparent. A moment when the three of them embrace in the studio – ‘g’day Suze’ – is a moving image of survival and love. “We decided to be happy and our happiness would be an act of revenge, of defiance,” Cave says, but the trauma is still there and is at the heart of the film.

We see how grief affected the family and his friends, but Cave is also intent on seeing the loss from another perspective. “It didn’t just happen to us, it happened to him,” he says. Meanwhile, day-to- day life continues: the shoes in the hall, Suze shifting the furniture – a gripe of Cave’s – and records to be recorded. This ordinary life infects his songs with supermarkets turning up in place of the Gothic Americana of old. “There is more Paradise in Hell than what we have been told,” Cave sings, defiantly getting on with it. One More Time with Feeling is a bold poem in itself, a portrait of the artist struggling to understand the essentially incomprehensible.