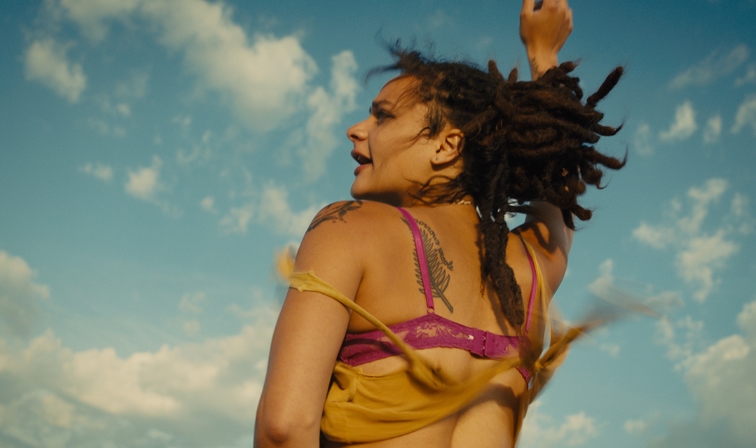 You can sometimes tell when a film has finally lost the plot. In Andrea Arnold’s excruciating road movie American Honey, it’s the moment a bear failed to eat the protagonist. By this stage – already a good two hours into the film – some viewers would have happily bestowed a Revenant-style mauling on anybody just to see the credits roll. Unfortunately, the bear lumbers off and we have another hour of iPod karaoke and sun flares before we can do the same. We first meet Star (newcomer Sasha Lane) as she scavenges for spoiled food in a skip with two young children in tow.

As the trio try and fail to hitch a lift home – “Are we invisible?” she says in one of far too many on-the-nose lines – she bumps into a rag-tag crew of alternative types who are flash-mobbing a Walmart. Star’s eye is taken by their leader Jake (played by Shia LaBeouf with a grungy ponytail like a down-at-heel Padawan). It turns out that the crew are a team of itinerant sales people going door-to-door selling magazine subscriptions, usually adorned with sob stories or a faux charity pretext. Drawn to the ‘charisma’ of Jake, Star leaves home “To look for America” – as Paul Simon might have it.

Team leader Krystal (Riley Keough) is quickly established as the antagonist, a tough girl with slightly methy teeth and a Confederate flag bikini who suspects Star of gunning after Jake. She also has a no-prisoners philosophy informing her own brand of free market capitalism. She’s the Sigourney Weaver role in Working Girl. In the van the group sing along to a relentlessly shuffled playlist of hip-hop and pop. It’s the kind of atmosphere that feels fun for precisely five minutes. Dope is smoked, liquor drank and someone has a rodent. They all have little quirks – one shows his penis whenever he can, another plays acoustic guitar, a girl is obsessed with Darth Vader etc. – but little else in regards to character. We never really get to know them. Under the increasingly toxic influence of Terrence Malick, Robbie Ryan photographs everything with that same magic hour light and close attention to natural detail which has become the ubiquitous aesthetic of American indies.

With a heap of dreadlocks, Star is posited as a kind of Earth mother, sensitively aware of little birds in the air (when she wants freedom), a moth stuck behind a curtain (when she feels trapped), cows in a truck (when she…realises our bovine friends have feelings too?) and the bear that doesn’t tear her face off (recognising a kindred free spirit, presumably). Star is a hopeless salesperson, sabotaging Jake’s efforts to train her in the requisite arts of commercial mendacity. Nevertheless, she falls for Jake and her whimsical and often random decisions are mostly spurred by her relationship with the slightly unhinged sales agent and attendant jealousies and dramas. Sadly, like the group that it portrays, American Honey is only superficially alternative.

The hedonistic lifestyle, the amoral feral capitalism, the sexual manoeuvring and even Star’s occasional charity are all conventional and buy into the values of ‘the system’. They’re noisy but they’re not rebels. It’s basically Cliff Richard’s Summer Holiday with a dog on a string. More damagingly, they’re not particularly likeable or interesting. Likewise, American Honey ticks off all of the indie clichés. Fireworks? Check. Standing up in convertible with your arms outstretched? Check. Grubby children? Check. But all of this could be forgiven, or at least put up with, if the film wasn’t so long and meandering. As with the Academy ratio, the punitive length suggests some kind of hefty, serious intent, but there’s almost nothing here to justify it other than a love of its own often dazzling cinematography and the incessant sing-alongs.