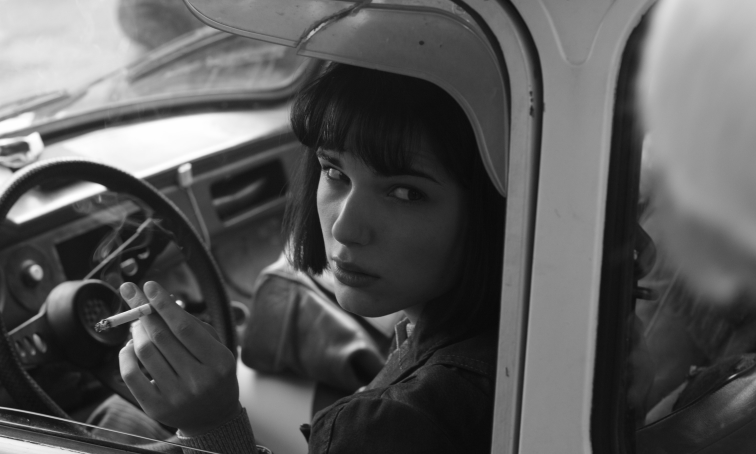 Early on in I, Olga Hepnarová the eponymous mass-murderer (played with rangy inscrutability by Machalina Olszanska) refers to a passage from Graeme Greene’s The Quiet American. It’s the famous underlying message of the novel which claims that it’s impossible to truly know someone else and that we should “just accept that no human will ever understand another human”. It’s at once completely in keeping and at odds with Petr Kazda and Tomás Weinreb’s relentlessly bleak real-life drama which for long stretches favours the impenetrable nature of its protagonist psyche before eventually wading heavily into her motives.

It may be the only way that her story could end – as the last woman executed in the Czech Republic it is perhaps inevitable that her trial will constitute the denouement, but it overcompensates for a film that slowly constructs the dislocation and oppression that Olga feels. In an early scene, a teenage Olga enters a room and Adam Sikora’s camera waits, observing the empty hallway for what feels like an age before her father exits the same room. It is intentional both in its implications and their ambiguity. When a letter that Olga actually wrote to a newspaper before her killing spree is read verbatim, that ambiguity dissipates . It’s be possible to read this as Olga’s own perception as opposed to objective truth, but it would be uncharacteristic of a film that otherwise takes its subject entirely seriously and at face value.

The final third of the film lurches from often wordless vignettes and foreboding atmosphere into verbose discourse when it would have been better off retaining its mystery. Olszanska plays Olga as a young women ill-at-ease from her childhood; treated harshly by her family but stubbornly sullen and moody even to their more warmhearted interactions. After a drug overdose suicide attempt that opens the film, her mother sternly tells her “To commit suicide you need a strong will, something you certainly don’t have”. Continued financial support and subsequent tears of grief suggest this was tough love rather than the hatred and bestial inhumanity that Olga sees and she proves her mother decidedly incorrect. “You say nothing,” one of Olga’s lovers tells her at one stage and it feels as though this is I, Olga Hepnarová in its element.

Olga’s own admission that she would “appear to be a lesbian” is redundant in the context of a piece that has previously explored her sexuality. All of the film is handled in such a way: from the beautiful monochrome photography that only extends the disconnection Olga feels with the world, to the understated and haunting performances, particularly Olszanska’s. It’s just a shame that I, Olga Hepnarová doesn’t have the confidence to conclude with the same emphasis on visual language that it had done so much to earn.