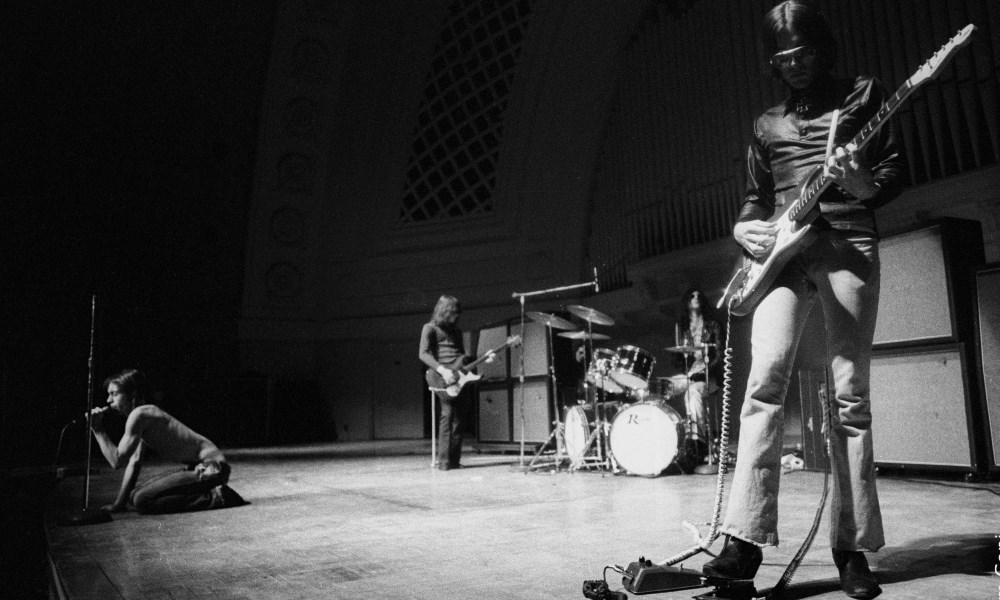 James Newell Osterberg Jr. is better known as Iggy Pop, inventor of the stage dive, proto-punk jester and the lead singer of The Stooges. Sitting down with cult New York film director Jim Jarmusch, Pop, alongside his erstwhile bandmates, goes through the history of one of the bands which – to echo a claim Pop makes in the new documentary Gimme Danger – did a lot to kill the sixties. Starting out a drummer in a series of high school bands, the young Osterberg burned with an ambition to escape the confines of his small-town America, perhaps best represented by the mobile home he was brought up in by his devoted parents.

Influenced by a diverse range of musical pioneers from John Coltrane to Jim Morrison, Osterberg managed to accrue the beginnings of a band with the brothers Asheton, Ron and Scott on guitar and drums respectively, and Dave Alexander on bass. Originally billed as the Psychedelic Stooges, the band found themselves touring with and heavily influenced by The MC5. Signed alongside their artistic ‘big brothers’ to Elektra records, The Stooges cut a debut album with The Velvet Underground’s John Cale as producer. “It was neat little poke,” Pop describes the album pithily. And pithiness was what he aspired to in part, following a childhood inspiration to write songs in 25 words or less.
The music itself was another matter though. Loud extended free music improvisations would characterize the stage shows with the audience entertained as much by Pop’s acrobatics as his simian alter ego took shape as something akin to Mick Jagger’s less restrained evil twin. Stage shows became more extreme and drug use began to take its toll, but the follow-up album Fun House would represent their masterpiece – a genuinely great record which track for track drags the sixties into the mud of the seventies and lays a path for all that would follow. Unfortunately, the higher ups at Elektra didn’t get it and The Stooges were once more on their own.
A brief stay of execution came with the interest of David Bowie and the recruiting of James Williamson on guitar. Raw Power was recorded in England and shifted from being a solo record to another Stooges release and featuring perhaps their most popular and iconic song Search and Destroy. Centripetal forces would see the band once more heading for implosion as drugs and increasingly violent and extreme stage shows culminated in the Metallic KO live album and Iggy audibly dragging himself across the stage through broken glass. The film itself is fairly conventional given the wildness of its subject matter and Jim Jarmusch’s pedigree. Survivors and casualties tell their wild tales as talking heads and grainy footage is rejigged to kind-of fit the songs played over them. Stories are visualised with library stock and some amateurish animation, as when the band van goes under a too-low bridge and is wrecked.
“It was a perfect metaphor,” someone helpfully points out. There are some omissions as well. David Bowie gets surprisingly short shrift and some of the more toxic elements of the band’s relationships are lost in the veneer of nostalgic reflection. Perhaps, this is simply the disappointment that comes along with seeing the once brash counter-cultural renegades installed into the Rock n’ Roll Hall of Fame and making ironic car insurance adverts. There’s something to be said for seeing new audiences appreciating the reformed Stooges and the band finally receiving their due, but gnarly old Jim Osterberg still looks like, when it comes down to it, he stills doesn’t give a fuck. And that’s how it should be.

Jim Jarmusch’s Gimme Danger is in cinemas and on demand from Friday. tickets.gimmedanger.co.uk