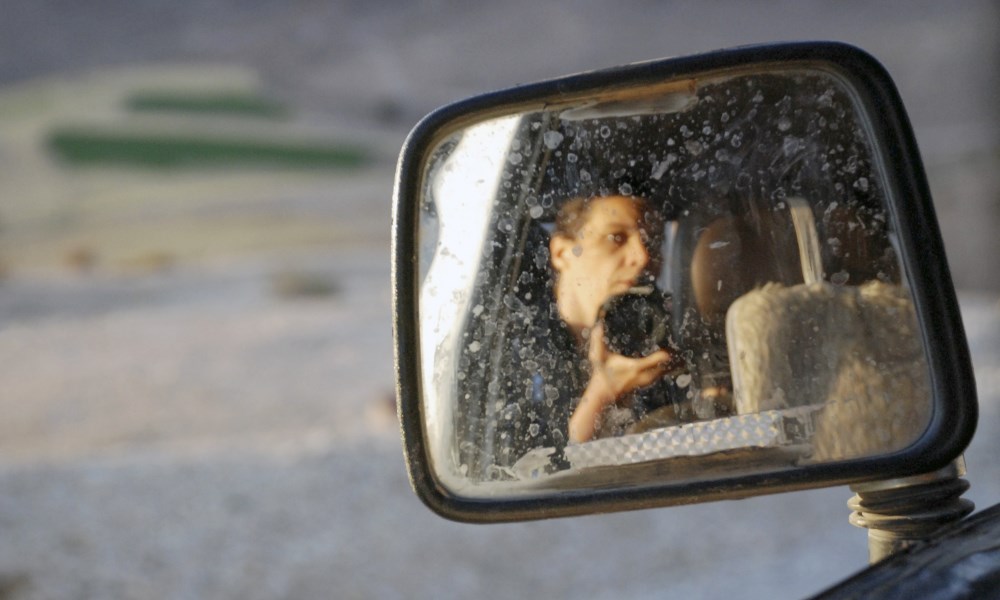 “She sees everything but is totally blind,” says Jacques Derrida crossing a New York City street as Kirsten Johnson tracks him with her camera walking backwards, half stumbling in the process. The French philosopher thinks himself frightfully clever with this witticism at the Big Apple-based filmmaker’s expense but a viewer of her latest work, Cameraperson, may take issue with a claim that she is anything but a true visionary. What role does a cinematographer play in the constitution of visual meaning and record? How is an image constructed to focus attention on the issues at hand? Questions that she strives and succeeds in answering over the course of this beguiling documentary.

Through a form of magical cinematic alchemy, a blend of perfectly orchestrated image and editing that performs on both an expansively macro and poignantly micro level, Johnson’s Cameraperson is a film that somehow encompasses all of humanity and life from its first moments to very last. On the one hand, and with the well-trained, inquisitive and determined eye of a journalist, she explores conflicts the world over that have wretched people apart, destroyed lives and left long-lasting physical and emotional scars. On the other, this latest work is a deeply personal, compassionate and intimate portrait of a daughter dealing with the declining health and loss of her mother to Alzheimer’s.

There is a wondrous duality to what is a vibrant patchwork of 25 years in the field; a culmination of a life’s work that treats memory, loss and suffering on a familial level as well as a punishingly frank inspection of what remains in the aftermath of some of mankind’s most heinous atrocities. From her NYC home base Johnson departs frequently to Bosnia, reeling in the wake of genocide. Still images of sites of mass rape and murder in Foča and Partizan look to the past; they observe, and preserve this memory. They are a tool for learning as much as investigation and Johnson’s camera is the vessel for this process. Scenes cut to black like frames in a projector and this allows for a moment’s breath and pause for introspection.

With breath-stopping immediacy we watch as a child is born in a Nigerian hospital and struggles for its first breath; in Sana’a, Yemen Johnson persuades a taxi driver to park outside an Al-Qaeda detention facility; in Afghanistan a boy blinded in one eye recounts the brutal death of his brother in a missile strike; in Huntsville, Alabama a girl – whose face is not framed – wrings her hands in desperate discomfort as she explains an unwanted pregnancy and how she will struggle to cope to bring another soul into this world. The disparate testimonies come from all points of the globe, peoples of stridently different walks of life and background and colour and experience. And yet it all fits together like pieces of a perfectly constructed puzzle. It is a tremendously life-affirming film.

Watching and then reflecting upon Cameraperson, one is left in a stupor of fascination at the incredible subjects Johnson brings to us, frustration at the cruelty and apathy of human kind, and yet somehow filled to the brim with optimism that we are all there for one another. Left dazed, confused, enthralled and yet uncertain as to what effect it has on you – such is the range of emotions that are felt when watching this extraordinary documentary. “You caught me,” exclaims Johnson’s mother as she walks into frame while she is filming at the family’s ranch in Wyoming. That is just the point; she is captured and preserved forever. And that is the real beauty of Johnson’s work.