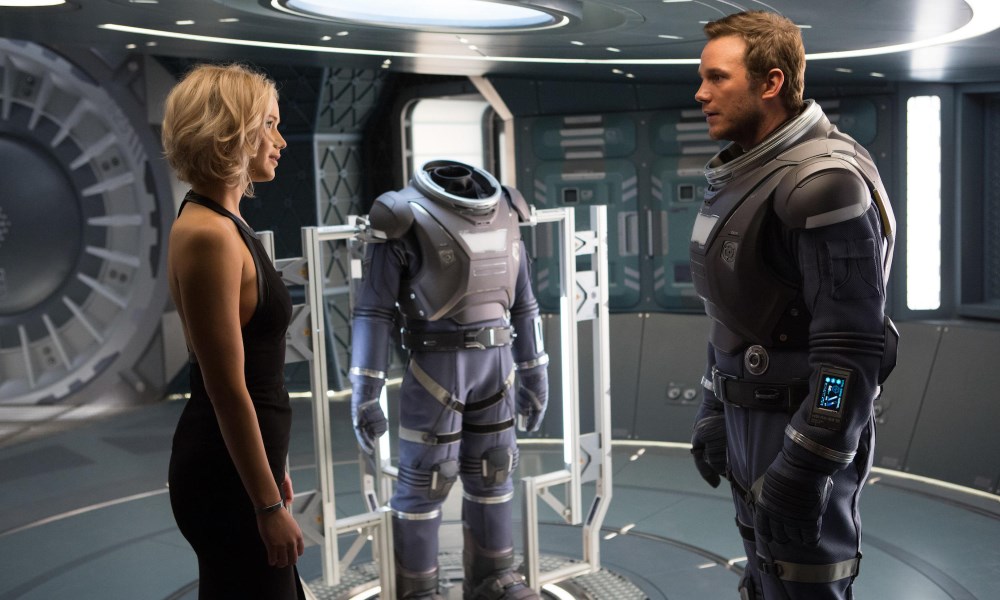 If you’ve ever been stuck in an airport lounge, motorway service station or transit hub hotel, you might feel a sceptical appreciation for Passengers, the latest film from director Morten Tyldum (Headhunters, The Imitation Game). Aboard an intergalactic shuttle, powered by the incredible star power of Michael Sheen, Jennifer Lawrence, Chris Pratt and Laurence Fishburne, all is not well with the workings of the machine. Jim (Pratt) is a blue collar schmo who awakes from suspended animation on the Starship Avalon, only to find he has another ninety years to kill and no-one to keep him company on this immense cruise liner.

An android butler (Sheen) is there to offer some solace – dishing out tired tidbits of self-help wisdom with a glassy deadness reminiscent of Chance the gardener in Being There – but it’s not quite enough to stave off the existential nightmare. Jim indulges in all the consumer luxuries he can find, until he’s had his fill and can’t go on, so he turns to the final answer of a fully commodified existence – online dating. The sleeping Aurora (Lawrence) wows Jim with her sassy video profile, and (smitten in the way of true voyeurism) he must wrestle with the dilemma of whether to bring her into the waking horror of his non-place existence.

At a level of direct narrative, what unfolds is so uninteresting, so predictable and tired that it achieves an atmosphere of almost sublime emptiness. Its plot is so similar to Titanic that you can’t help but feel like this film might be an arch commentary in search of an incendiary psycho-analytic dissection courtesy of Slavoj Zizek. It’s a non-rom-com in a vacuum which, intentionally or not, has more in common with a film like Up in the Air than a properly futurist space drama. The central idea is ostensibly whether love can redeem even the direst situation, but it comes across like a far bleaker study (more potent because it really believes its own message) of the way romance fiction is used to cover over the blandest realities of consumer culture. Whatever strange alchemy went into this film, nothing is so strange as how compelling it proves to be when you approach its premise with complete seriousness.