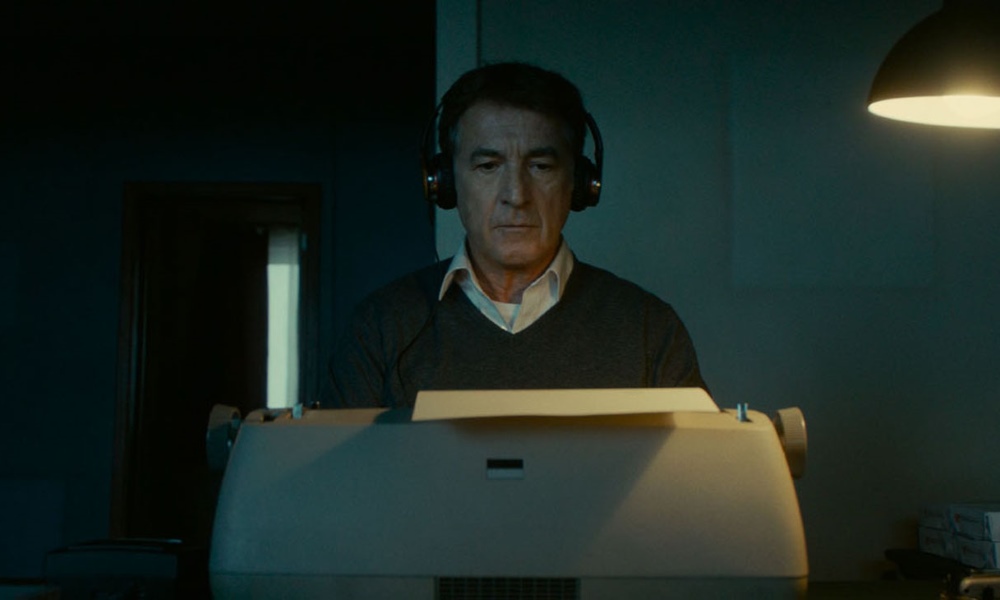 Blending various influences from the likes of The Conversation, Blow Out and perhaps most closely The Lives of Others by German director Florian Henckel von Donnersmarck, Scribe is an efficient, albeit underwhelming evocation of these surveillance thriller masterpieces.

Though it does not come close to its lofty aspirations, the film – a debut feature by writer-director Thomas Kruithof – does boast an impressive cast of French talent, led by the ever-reliable François Cluzet. The veteran actor, known for Tell No One and Les Intouchables, plays the titular typist, Duval, and a character whose methodical, meticulous ways boarder on the maniacal – as is shown in an opening prologue where the demands of working at a law firm in subservient conditions lead him – two years later – to drink and unemployment.

Down on his luck, but sober, he struggles to re-enter the world of work until a mysterious phone call from ‘Monsier Clément’ presents him with an ask-no-questions opportunity. The restrictive, lonely and analogue framework under which he copies telephone recordings from tape to paper via a typewriter is echoed in little range for the gifted actor to express himself other than alternately anguished, guilt-written and uncomprehending stares.

And as you might expect, upon hearing something he shouldn’t, Duval is left in something of a quandary. But like the automated, mechanical manner that he transcribes the cassettes assigned to him, the action never really picks up or generates any suspense. There are elements here of slow-burning Le Carré-esque spy thrillers, but at the same time right-wing political posters proclaiming ‘France is back’ – or perhaps being “Made great again” – suggest a more modern relevance. However, with so much suggestion and allusion elsewhere there is little conviction.

References to other cinematic touch points work up to a point but Scribe develops none of its own real identity. The original French title, La mécanique de l’ombre (The Mechanics – or inner workings – of The Shadows) refers more subtly to societal manipulation or puppetry by largely unseen or unknown forces but Simon Abkarian’s fixer and Sami Bouajila’s government man are not fleshed out and a thin plot becomes increasingly predictable. Further, a female part shoe-horned in for Italian actress Alba Rohrwacher as a fellow recovering alcoholic flits irritatingly at the periphery of the main body of narrative. She exists only to humanise Duval as a fellow loner and then becomes prey when unwittingly embroiled in his ‘problèmes’.

Unlike its forebears, the insularity and scaled-down political intrigue of Scribe – which dabbles with references to the decade-long Lebanon hostage crisis of the 1980s and suggestion of Europe’s current right-wing shift – limit its impact and is representative of a slightly misguided film trying too hard to be something it can’t quite become.