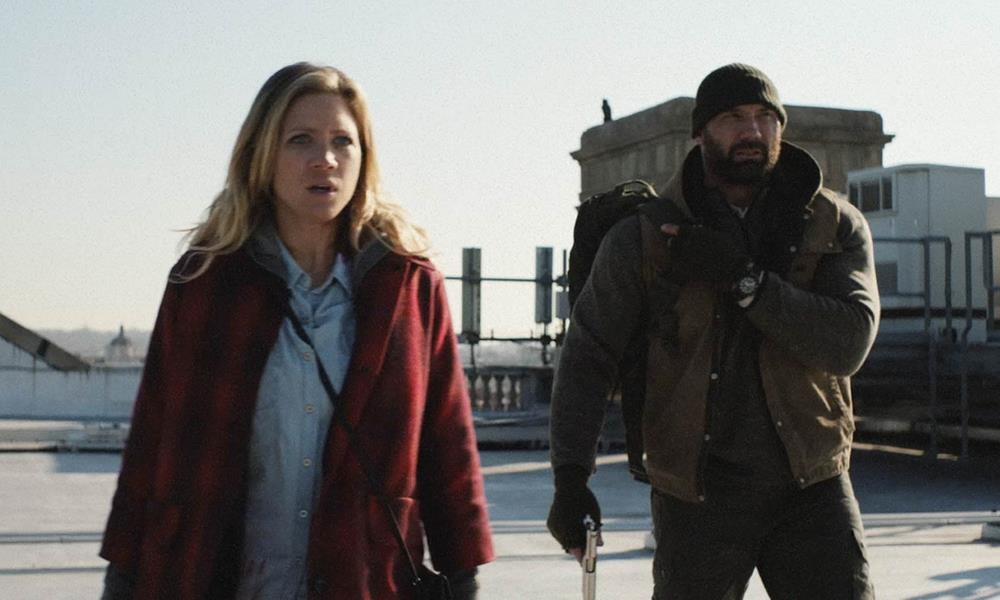 Many a film has landed in Cannes laden with Sundance buzz. One year it was Beasts of the Southern Wild, another it was Whiplash. The latter injury will have befallen many who went into Cary Murnion and Jonathan Milott’s B-movie wannabe Bushwick with high expectations.

We approach New York via aerial helicopter shots, but something’s not right as college girl Lucy (Brittany Snow) returns with her boyfriend to visit her grandmother in her home neighbourhood which gives the film its title. In one of a series of long single-shot scenes, violence and mayhem have broken out on the streets as black-clad paramilitaries shoot people up and anarchy appears to reign. Lucy is soon alone and in peril of being raped when she is rescued by Dave Bautista who is a janitor the way Steven Seagal used to be a chef. They join forces and play their way – sorry make their way through several levels and environments: school, street, house, kitchen etc as CGI flames lick the buildings and CGI helicopters are heard more than they are seen. A couple of stop offs at Lucy’s behest join them with Lucy’s doped-up and dopey sister Belinda (Angelic Zambrana), where they finally manage to collar and interrogate a masked soldiers (Alex Breaux).

After a bit of punching he reveals that there is a new civil war in progress, with Texas and others attacking New York in order to pressure the President to accede to secession. Don’t worry though. Nick Damici and Graham Reznick’s screenplay is too glibly incoherent to have anything to say politically. In fact, the opening scenes exploitatively play up white fear as the locals of colour go on the rampage: “When you white bitches gonna learn?” says a would-be rapist. Some kind of banding together is suggested as the local black gang members have the guns and the church apparently has the people. But this is introduced, via a stereotypical ‘black momma’, only to be abandoned a little later. If there is one loud message, it’s ‘Keep hold of your guns’.

There are the occasional moments when Bushwick lets on that it knows that this is all truly awful. Belinda is totally unaware of what is going on, assuming that the neighbours are playing Call of Duty with the volume loud. But this so-bad-it’s-good shtick gets old pretty fast, like a cook winking as he spits in your soup. Another swiftly ageing cliche is this one-long-take nonsense. Children of Men, Gravity and Birdman all made an original use of the technique but this doesn’t even stand up to the flat-out madness of Hardcore Henry. Murnion and Milott even hide their cuts badly, panning across a room, lingering a moment on the airing cupboard, and then resuming pan. Budgetary limitations also make for a lot of sub-par CGI and the weather changes mid-shot. The neighbours are playing Call of Duty? In your dreams.