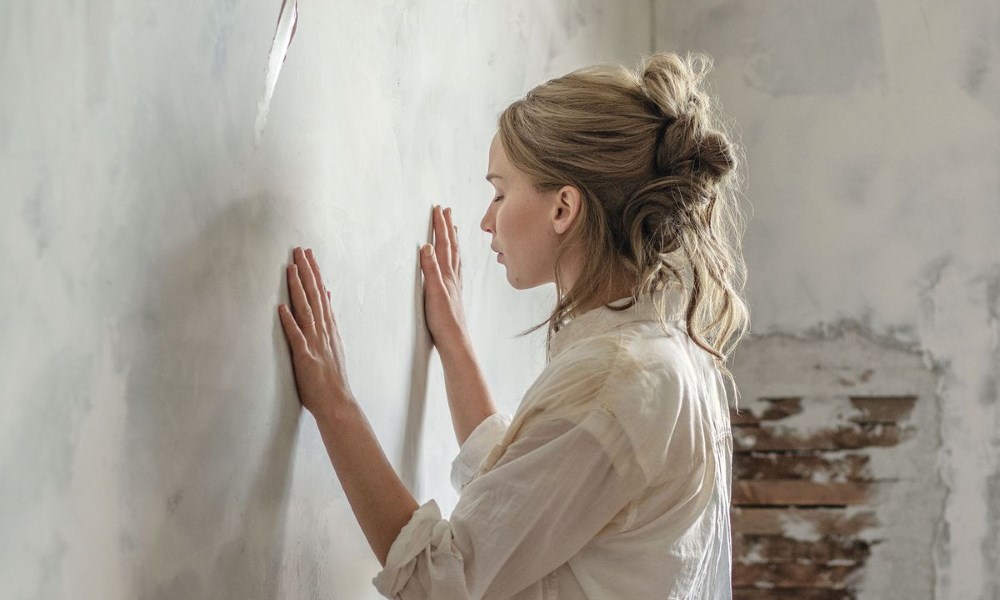 Requiem for a Dream and Black Swan director Darren Aronofsky returns to cinema screens with Mother!, an utterly insane film starring Jennifer Lawrence and Javier Bardem, which begins as a haunted house tale before transforming into an allegorical journey.

Aronofsky has always been a filmmaker who has lived on the edge between the profound and the profoundly silly. From Pi to his biblical epic Noah, wrestlers and ballet dancers, the meaning of life and the cure for death all mix and clash throughout his films. Mother! is perhaps his most extreme film to date, but if you’re going to go over the top, you might as well break through the ceiling and head for the stars. Before getting into it, however, it must be noted that for the most effective viewing experience the film should really be seen completely and utterly cold. Following a brief fiery prologue, we meet a young woman (Lawrence) as she wakes up in her house. She is renovating the creaking residence while her poet husband (Bardem) struggles with his writer’s block, like a Latin-flavoured Jack Torrance.

She feeds and cares for him and offers him encouragement but their idyll is interrupted by the arrival of a strange visitor, a doctor (Ed Harris) with a hacking cough and a taste for the drink. Having mistakenly been informed that the house was a B&B, Harris ends up staying anyway. He’s soon joined by his wife (Michelle Pfeiffer), who makes alcoholic lemonade and criticises the young woman’s knickers. Something is going on and the young woman, who is also prone to brief fits of pain, is unable to get rid of her unwanted guests as the house groans around them. The geography of the house is never quite certain with rooms changing position but it has a creepy cellar, a work room with a beautiful jewel, and holes in the wall that still need repair.

The poet tells his guests that the house burned down and he and his wife rebuilt it together. More people arrive and the woman increasingly feels besieged. A family tragedy plays out and blood is spilt, blood which seems to become part of the architecture of the house. The first half of the movie plays out very much like an old haunted house film – there’s a dollop of Shirley Jackson’s The Haunting of Hill House in here – and the sound design and camerawork always keep the audience on edge; never quite sure where we are or what exactly is going on. A creeping dread pervades and the young woman’s vulnerability is emphasised by the fact that she pads around the house barefoot and seems either unable or unwilling to leave the confines of the house. She’s never able to properly impose herself, either because of her husband’s fickle needs, or the quick shifting nature of the events that keep her constantly off balance.

If things have been strange so far, stuff quickly goes absolutely crazy as the young woman becomes pregnant and the poet finally breaks his block and writes his poem. It is greeted with instant success and the woman prepares a celebratory meal only for her to have it ruined as fans, press and agents invade the house. An escalation ensues as the film forsakes any pretence of realism. It will threaten the life of the young woman, endanger the life of her unborn child and bring about the annihilation of the house itself. Aronofsky’s Mother! is primarily an apocalyptic allegory which rages against the exploitation and destruction of the natural world. The haunted house first half is similar to how a good third of Psycho is about Marion Crane stealing from her boss. There is satire too in the midst of the invective. The narcissism of the poet, Bardem playing his sleepy charm for all it’s worth, is a perhaps self-deprecatory dig at the visionary who doesn’t do the dishes. The violence and suffering on view is at times shocking, but Aronofsky is unembarrassed in his intent not only to go there, but to go even further.

Yes, it is pretentious. But pretension is also about ambition and this is cinema that is willing to kick out the lights. Lawrence, Pfeiffer, Harris and Bardem are great at creating a group of people who seem to operate on a level of inescapable paranoia, reminiscent of early Polanski. And the horror set up is deftly done. But Aronofsky’s film will live and die by its destination. It will take some mulling to unravel the allegory, but there seems to be a meticulous web of references and interpretations available. Whether they cohere will take a while to work out, but the ride itself is exhilarating and terrifying at the same time. People will love or hate it. As the boos and cheers at the press screening already attested. But whether your team Aronofsky or team sensible, Mother! remains a “WTF” of biblical proportions.