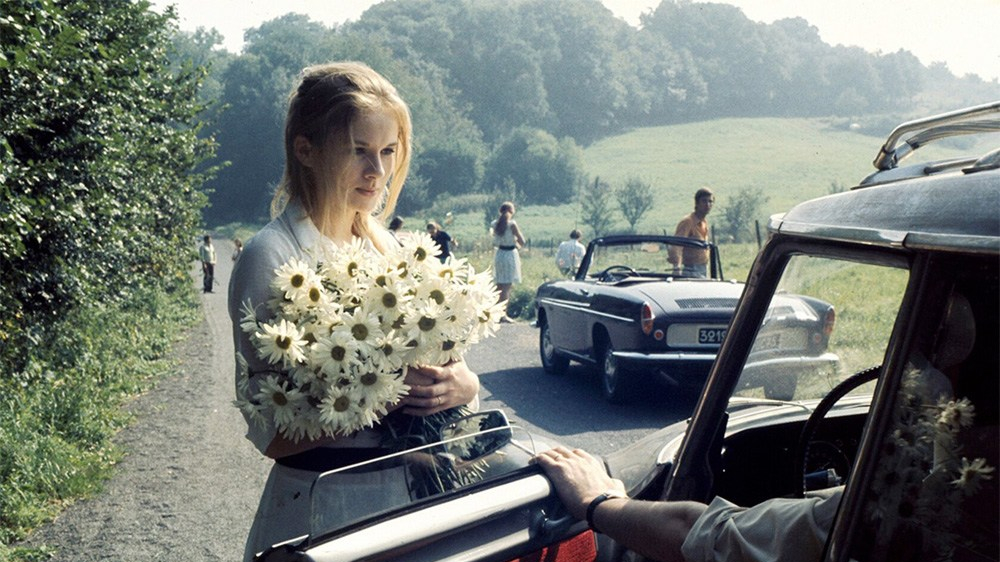 A white scarf flutters through the warm Paris air as the owner lies prone on the concrete below, her face obscured. Off-screen, she is moved to her bed, as her husband and the maid who saw her fall. We know nothing of the woman – even her face is hidden from us. Perhaps it is to spare us – and her husband – from her injuries, yet in hiding her head, the frame weirdly dismembers Elle’s body.

This dismembering continues in flashback, as Luc recalls their first meetings in his antique shop. As she follows him up the stairs to weigh the gold crucifix she has brought to sell him, the camera focuses on their feet as it follows them up. Like a preemptive autopsy, the camera divides and examines her body meticulously, just as he does with the crucifix. Her on-screen dismemberment is an expression of Luc’s desire to control and possess her.

Fleeing her controlling parents, Elle desires freedom above all else, yet Luc treats her as one of his antiques, like an object commodified for his pleasure; her rejection of a bunch of wildflowers that he gives her is telling, both as a transactional object and as emblematic of freedom curtailed and commodified. After they marry, Elle frequently disappears, driving Luc mad with jealousy at the thought that she is with another man.

Meanwhile, Elle’s fascination with natural history, particularly that all animals are made from the same ‘raw materials’, suggests the essential, inescapable root of their depression. Made from the stuff, Elle and Luc remain irretrievably incompatible. Certainly, their fugue feels all-encompassing, the washed-out whites of Luc’s apartment complementing the greys of overcast skies and dimly-lit evenings. Even Luc’s television set frequently turned on but rarely watched, seems perpetually out of focus, all static and blueish monochrome. The film’s muted qualities, its drained colours, languorous pace and understated, naturalistic sound design all tug the edges of unease; while the non-linear narrative suggests that time is out of joint.

An extended sequence in which the couple watch the final scene of Hamlet clues us into Luc’s psychology. Fancying himself somewhat as Shakespeare’s tragic character, he seems to forget that the emotional paroxysms and black moods of the eponymous Prince of Denmark drove his betrothed to suicide. As Luc looks on at the body of his wife, he seems oblivious to the fact that his singular narration – his centring himself as the sole subject in their relationship – may have been what unbalanced them in the first place.