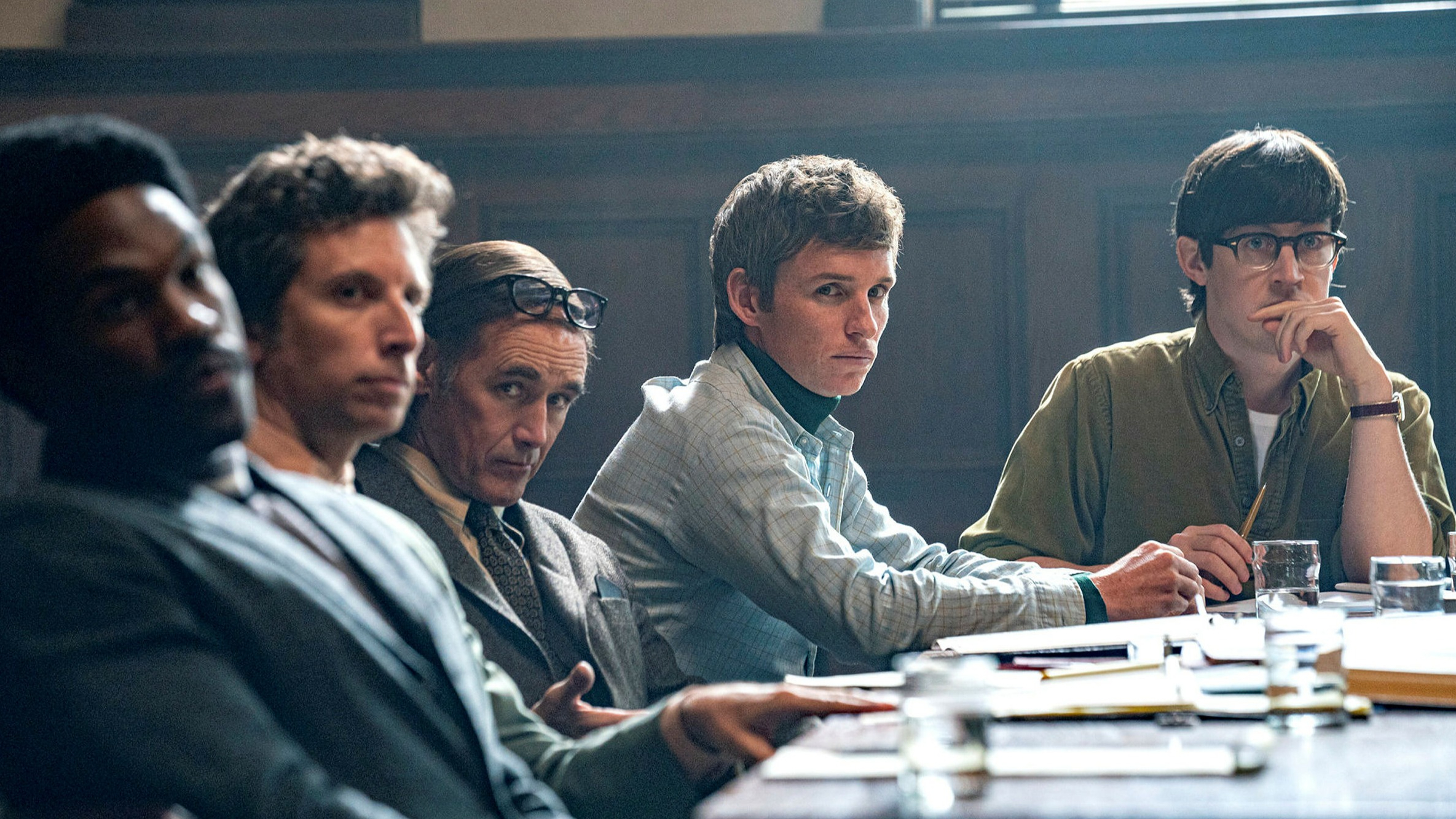 On 28 August 1968, during one of the bloodiest summers of the Vietnam War, several thousand protestors made their way to the Democratic National Convention in Chicago. The protestors violently clashed with authorities in what was later described by the official enquiry as a “police riot“.

The so-called “Chicago 7” (initially eight) were arrested and charged with conspiracy to riot in what became one of the most notorious criminal trials in American history. Veteran scribe Aaron Sorkin returns to the director’s chair for his retelling of the events of the trial. Despite the cool reception to his directorial debut Molly’s Game, The Trial of the Chicago 7 sees a mature Sorkin back on form with all the punch and momentum of his better work, while maintaining a welcome degree of control over his most idiosyncratic tics.

Among the film’s stronger points are its casting. Sacha Baron Cohen – pegged for the role since 2007, when Spielberg was lined up to direct Sorkin’s script – feels born to play disruptive showman Abbie Hoffman, relishing every one of the barbed jabs he directs at the court. Meanwhile, Eddie Redmayne is perfectly cast as Tom Hayden, an entitled egotist whose reach exceeds his grasp.

The deep oaks and bellowing voices of the courtroom are as imposing and stately as any of The West Wing’s presidential corridors, though the static nature of the space forces Sorkin to ditch his most famous device – the walk and talk – leaving him to find new methods of turning the banal machinery of statecraft into dynamic narrative.

The solution is in Alan Baumgarten’s non-linear editing, which frequently flashes back not just to the riots, but to Hoffman’s stand up routine in which he lampoons the trial in real time. It certainly keeps the film moving along at a typically Sorkin-esque pace, though the perspectives of these flashbacks sometimes feel stuck between the objective and subjective – offering personal, impressionistic accounts of the chaos of 28 August 1968 – but missing the trick of representing the same events from different perspectives or half-truths.

Some of the liberties that Sorkin takes with the real-life trial undermine his point, too. The conclusion is entirely fabricated and cloying in an Oscar-baiting way that feels very dated. The most significant departure from reality, however, is the misrepresentation of Joseph Gordon-Levitt’s prosecutor Richard Schultz. Gordon-Levitt does a fine job of capturing Schultz’s ambition and meticulousness, presenting him as morally conflicted between his career aspirations and the fact that Judge Julius Hoffman (no relation to Abbie) was clearly biased against the defendants. This Schultz, however, is a far cry from the notorious ‘government pit-bull’ of the real trial.

In the film’s most gut-wrenching scene, black defendant Bobby Seale (Yahya Abdul-Mateen II) is bound and gagged in court. Not only did this ordeal last for several days – not a single session as depicted in the film – but there is little evidence that Schultz objected to this obviously racist treatment as he does in the film. In any ‘true story’, there are always elisions and embellishments, and fictionalised narratives do not on principle have an obligation to historical fact. But details like this matter in a story about state repression against civil liberties: as mechanisms of the state, it matters how prosecutors are represented.

This complaint aside, The Trial of the Chicago 7 remains a gripping and intelligent courtroom drama. Not only does it represent some of Sorkin’s best work for years, but in this time of civil unrest and with the dark clouds of November nearly upon is, this reminder of the right to resist the state could not be timelier.

The Trial of the Chicago 7 is in UK cinemas now and on Netflix from 16 October.