Action movies are a young man’s game. Or they used to be, before Sylvester Stallone resurrected the hard-man genre last summer with his team of middle-aged action heroes in The Expendables (2010). Now there’s a fourth Mission: Impossible on the way with Tom Cruise still firmly strapped into the lead role, and even Tony Scott has been talking up the possibility of a Top Gun sequel. Middle-age, it seems, is no longer a barrier to kicking ass. 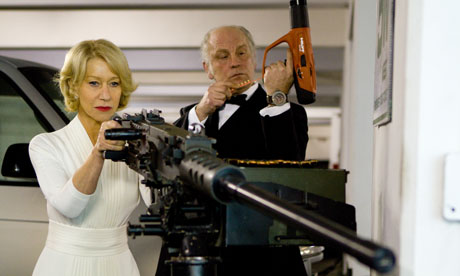 As Bruce, John and Morgan traverse the States in search of the information that will reveal why they are being hunted, there are adventures galore and numerous double-crosses. Much of it is played for laughs, so when the team suffer actual violence it strikes a strangely unemotional tone. However, the comedy works well, even if the action sequences are somewhat less than original. Malkovich in particular delivers a great turn as a paranoid acid casualty, reprising elements of his role in the Coen brothers’ spy-satire Burn After Reading (2008). Willis has never lacked charisma, and he charms his way through the film with a wry eyebrow. 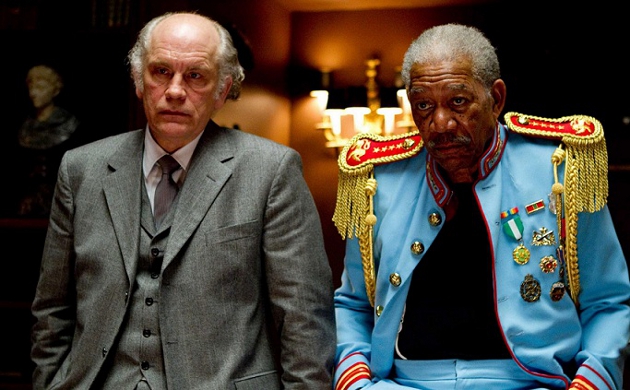 Much of the fun to be had in Red is in watching the film’s veteran actors being placed within an “action flick” context. And although witnessing Helen Mirren brandishing a machine gun certainly raises a wry smile,  anybody hoping for a refreshing depiction of powerful, strong action-women (in the mould of Kick-Ass’s [2010] Hit-Girl) may find themselves disappointed in Red’s approach to female characterisation. Playing opposite Mirren is Cooper’s superior, Wilkes (Rebecca Pidgeon), a bland, cold careerist. Worse still, a fair amount of the comedy found within the film’s first half seems to be based on Mary-Louise Parker’s Sarah being variously gagged, bound, drugged, or simply dragged kicking and screaming out of the comfort of her home.

Despite such issues, Red remains a pretty light, fun romp. Schwentke’s direction varies from scene to scene, but there are a number of humourous visual gags and nods, from a mock Spaghetti Western shootout to Bond-esque zooms. It’s unlikely to live long in the memory, but its functional an entertaining couple of hours.