Originally written by the late French actor/director Jaques Tati in 1956 in an attempt to reconcile with his daughter, The Illusionist (2010) had lain dormant for almost fifty years before eventually finding its way to director Sylvian Chomet’s desk following the release of Belleville Rendezvous (2003).

Although Chomet kept in close contact with Tati’s caretakers, the film has his very distinctive style stamped all over it. Like Belleville Rendezvous there is very little dialogue, Chomet choosing for his characters to express themselves visually and this allows the viewer to take pleasure in the film’s wonderful animation. Combined with a simple but heartfelt soundtrack, The Illusionist is an honest account of the importance of companionship during the darker times of one’s life. The result is a beautiful and poignant film of which Tati would have been proud. 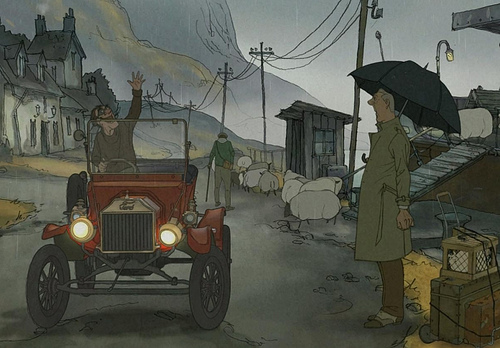 Starting in Paris in the late 1950s, the story follows Tatischeff (Jean-Claude Donda), a struggling illusionist who’s stage shows are being usurped by rock and roll music. Out of work and realising that his humble brand of magic isn’t flamboyant enough to maintain the attention of French audiences (beyond his two loyal followers), Tatischeff leaves France and crosses the Channel in the hope that there is still an opening for him. Accompanied by a rabbit with a taste for human flesh he moves from small cafes to grotty bars before eventually finding himself in a Scottish pub. There he strikes up a friendship with a young girl, Alice (Eilidh Rankin), who is awestruck by his abilities, believing his magic to be real. She inspires him to perform in Edinburgh and the duo travel to the city in search of a final break. Resolving itself there, the film leaves behind a sweet and heart-rendering message about friendship and the ability to move on.

Much of the story’s charm lies in the relationship between Tatischeff and Alice: he is enormously affectionate towards her and she is lost for words by his magic. Her encouragement is uplifting, driving him to succeed as a performer and father figure. The wonder that Tatischeff sees in her eyes at the simplest of tricks is a great relief both for him and the viewer having experienced the loneliness that comes with the crowds bored reactions to his shows at the start of the film. 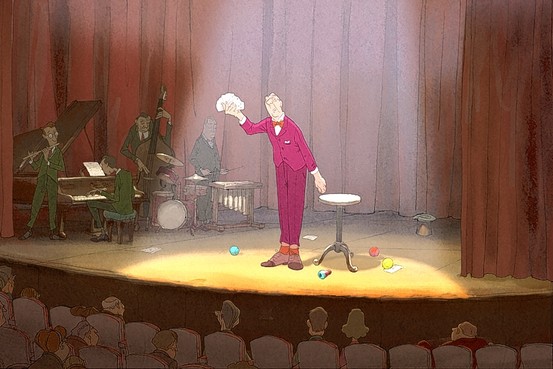 Arriving at a time in which 3D CGI is about the only form of animation in cinemas, The Illusionist’s hand-drawn visuals are, like Tatischeff, on the cusp of being outdated. The film acts as a reminder of some of the magic of traditional animation and it is impossible not to be repeatedly amazed by the sweeping English landscapes or Edinburgh’s dusty streets. Every frame is a work of art within itself and somehow creates a nostalgic yearning to live in 1950s Paris and ride on Steam Trains. This isn’t a film to be rented at Blockbuster on a whim or shown to two screaming six year olds, it deserves far more respect than that. At the very least it breathes life into the dying art of hand-drawn animation.

The Illusionist’s treatment of Tatischeff’s end-of-an-era descent into lonely bars is immensely sad and there are moments as heartbreaking as the montage of Carl’s life at the start of Up. That said, there is much enjoyment to be taken from the film too. Chomet and Tati create a world of excitement and wonder that makes the viewer just as fascinated by Tatischeff as Alice is. Ultimately, The Illusionist is a character piece that, despite the lack of dialogue, beautifully depicts the pitfalls of growing older and moving on. If hand-drawn animation dies with The Illusionist, then it went out with a bang.