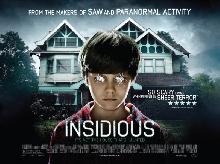 Having been billed as the new Paranormal Activity (2008), I went to see Inisidious (2011) with perhaps undue expectation. Was I disappointed? In a way, yes: it’s no way near as clever nor innovative, but it certainly delivers the necessary abundance of ‘jumps’ and tension-filled over-the-shoulder tracking shots to be credited as an effective (if a little rudimentary in its methods) horror flick.

The story begins in familiar territory, which is no bad thing (if it aint broke…): couple move into creepy house, start hearing strange noises and, before you know it, malevolent creatures are causing havoc. The new spin here, though, hinges around eldest son, Dalton (Ty Simpkins), falling into an unexplainable coma, from which no Doctor can awake him. Couple this with the stress of ghostly beings haunting her every waking (and sleeping) moment, protagonist Renai (Rose Byrne) is left with no choice but to call exorcist-come-female Giles from Buffy to sort things out.

The third-act falls apart slightly in its attempt to explain the connection between the creatures’ dimension (dubbed ‘The Further) and our own, along with what’s happened to Dalton and how they might save him. However, father Josh‘s (Patrick Wilson) journey into The Further arguably brings a new ‘dimension’ to the film’s potential for horror, when the usual boundaries are stripped away to leave the audience unsure of their footing.

Unlike box-office rival Scream 4 (2011) (if you’re umming and ahhing, go for Scream over this), Insidious doesn’t have the well-known cast to fall back on. Rose Byrne and Patrick Wilson do a passable impression of scared-out-of-their-wits, but fail to inspire the audience connection which would have taken it to the level of, say, Paranormal Activity, which injects us with that desperate urge to see protagonists Katie and Micah survive. 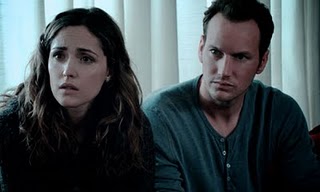 A surprisingly intriguing acting turn comes in the form of comic ghost-busting duo Specs and Tucker: classic creature-fodder who unwittingly steal the show on a number of occasions with their competitive banter and great comic timing. Comedy and horror aren’t as deftly interspersed as in the brilliant Drag Me To Hell (2009), for example, but never-the-less provide acute relief at key points.

Good CGI is vital for many supernatural horrors, but Insidious generally avoids this in favour of make-up. This ranges from distinctly chilling ghostly faces (with a touch of effects to give their body movement that jarring, robotic edge), to a demon who looks like Darth-Maul’s not-so-successful brother, who’s traded in his Light Saber for a Freddy-esque set of razor claws.

Unconventionally, the most successful ‘jumps’ of the movie barely use or need either of these and occur during Renai’s nightly trawls through the creaky house: well-timed glimpses of that ‘something in the corner’ or a dark shape lurking behind slatted closet doors are classic horror at its best.

The score of the movie is pretty apt for the genre, save the bizarrely loud screeching strings used during the credits and peppered in very occasionally throughout. Another random but pretty interesting touch is Darth Maul’s penchant for 40’s style Rhythm and Blues – always good for sharpening your claws to.

Despite following a fairly formulaic narrative (once again, no bad thing), Insidious pulls off more than the usual compliment of spine-tingling scares and memorably grotesque imagery – all with a much lower body count than you’d expect. Well-shot and imaginatively executed, this film should satisfy hard-core horror-hunters and terror-toe-dippers alike, while perhaps not pushing as many envelopes as its potential promised.