A man gets dressed in his bedroom; a bird flies in; he catches it and sets it loose again, only for it to return; the room is silent; the man smiles; a flute flurries over the top. Is Sparrow (2008) really a Johnnie To film? Yes – and the Exiled (2006) director is kicking it back in style. Sparrow is a nonchalant little piece, all style and little plot.

Kei (Simon Yam) is the leader of a gang of pickpockets (Gordon Lam, Law Wing-Cheong, Kenneth Cheung). They work their trade across the town, lifting valuables from passers by with a cheeky grin and no fear of being caught. Then along comes a beautiful woman who promptly turns the tables on them all.

Sparrow is at its best in the opening third, as Kelly Lin’s damsel in distress out-drinks, out-runs and generally out-smarts our band of crooks. Shot seductively around the city’s bustling streets, To conjures up an intoxicating sense of romance with barely any dialogue at all. It’s more of a mood poem than a movie, completely steeped in French New Wave chic. Kei even spends his time taking black and white photos on an old camera. 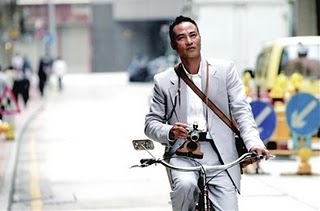 The playful score flutters around as the screen fills up with compelling sights. The aesthetics are strong, but Sparrow’s script zips out the window once we get round to anything more substantial. You can throw in some amusing cross-dressing and a fat cat with a cigar, but that doesn’t give you a storyline to follow.

To is no idiot: keeping the runtime to a slim 88 minutes, he makes room for a stunning slow-motion climax, all  The Umbrellas of Cherbourg (1964) and rain-drenched thieves. You may wonder why on earth any of it is happening, but the razor-sharp images will stick to your retinas long after the music fades out.

Sparrow is clearly more personal than a commercially friendly actioner – a great reminder that Johnnie To can make anything look cool. Despite his versatile talents, though, your pockets may come out feeling a little short-changed. As a lightweight thriller, Sparrow is a few feathers short, but as a sensory pleasure, it’s as gorgeous as celluloid gets.