As belated as it is unexpected, considering the loose end-tying finale of the flat third instalment in the franchise, Scream 4 (2011) (or Scre4m in some circles) comes eleven years after the previous and apparently final chapter in the post-modern slasher trilogy, reuniting screenwriter Kevin Williamson with self-made master of suspense Wes Craven for their fourth stab at satirizing the horror genre, which sees our three haggard protagonists return for more scares, bloodshed and self-referential laden subtext.

Less a remake, more a story continuation with shades of a generational reboot, Scream 4 is set on the tenth anniversary of Ghostface’s last murder spree, taking the setting back to where it all began in the pleasant town of Woodsboro. Perpetual victim Sydney Prescott (Neve Campbell) returns for a signing on the last leg of her book tour, joining up once again with (now sheriff) Dewey Riley (David Arquette) and Gale Weathers (Courteney Cox), ex-journalist and now-struggling writer.

However, this being a Scream film, the bodies start piling up almost instantly and new characters are embroiled within another twisted mystery over who is behind the mask and more importantly, why he’s picking off his latest victims. Staying with her aunt (Mary McDonnell) and cousin Jill (Emma Roberts), it falls to Sidney once more to confront Ghostface and save the town of Woodsboro.

Williamson’s bitingly witty script, which was unmistakably the sorely-missed element in Scream 3 (2000), aims much more for laughs rather than genuine scares, which unfortunately robs Scream 4 of the edginess that made its opening two instalments so popular and memorable, despite the effective self-referential humour that makes these films stand out from an increasingly imitable crowd. Though this is arguably the bloodiest film in the series, it is also the most over-crowded and over-plotted, with characters introduced for the sole purposes of being offed, subplots that go nowhere and more red herrings than the narrative can actually accommodate. 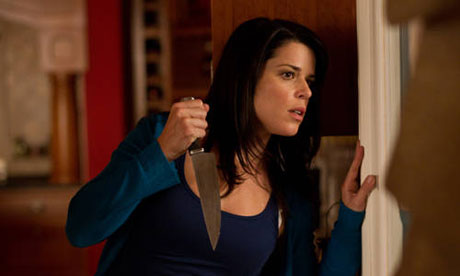 Where the film works best is in its sharp, self-aware attitude toward the rules (or lack thereof in contemporary cinema) of the horror genre, and can perhaps be forgiven its occasionally unexciting dialogue and ridiculous one-liners. The film’s best line comes during the unpredictable third act reveal, as Sydney reiterates the accepted opinion that remakes should never toy with the success of the original, an astute observation that parallels the films self-knowing outlook on movie sequels.

Grounding the series in its modern day setup, where genre trends such as ‘torture porn’ and ‘shaky-cam’ have taken centre stage over old school slasher aesthetics and social networking has become the backbone of communication. In a techno-centric environment in which almost everything is either being filmed, tweeted or broadcast live over the internet, Williamson never really explores potential of his ironic premise, rarely giving social commentary to these monumental cultural and genre shifts. Scream 4 would have worked better if it didn’t fall back on convention as much as it eventually does; becoming the very thing it attempts to send up.

Seeing Campbell, Cox and Arquette return once more is as assuring as being with old friends again, even if they appear at times vacant and unconcerned. Campbell’s Sydney is substantially relegated to the sidelines, leaving it up to the younger generation to pick up the slack which they are more than capable of doing, with Roberts and Hayden Panettiere giving excellent performances as fearless, cine-literate high-schoolers.

Does Scream 4 add much to the legacy of its three predecessors? Not particularly, but it’s still great to be in familiar territory in a rare third sequel that is as enjoyable as it is rushed, and flawed as it is nominally perceptive, despite its frequent lapse into laughable cliché.