It’s back! The 2011 Raindance Film Festival kicked off earlier this evening with an opening gala featuring the UK premiere of existential drama Another Earth (2011), the debut fictional feature from American director Mike Cahill  – starring Brit Marling (who co-wrote the screenplay alongside Cahill), William Mapother and Matthew-Lee Erlbach – which also picked up the Special Jury Prize at this year’s Sundance Film Festival.

Rhoda (Marling) is a promising young astronomer who is about to begin her studies at one of the top universities in the US. Her future seems bright, until the night that a new planet appears in the sky. After attending a party, Rhoda makes the fateful decision to drink-drive and, after spotting the strange planet, is involved in a tragic car accident which kills the pregnant wife and young son of John (William Mapother), a renowned composer.

Four years later, Rhoda is released from prison and strikes up a relationship with John, who is unaware of the tragic connection between them. As their relationship develops, so too does our understanding of the new planet. Given the name ‘Earth II’, its makeup mirrors ours in every way, including the existence of our current inhabitants. This causes considerable existential questioning, with Rhoda wondering if her parallel Earth II counterpart made the same damaging mistake which continues to torment her. 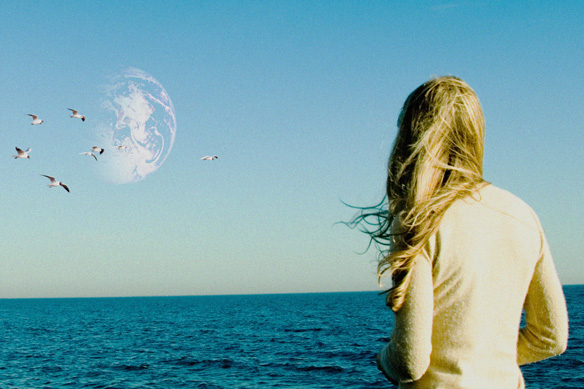 It should be noted that despite what the trailer may suggest, the fascinating science fiction premise of the film serves to complement the key dramatic situation and that an exploration of this idea is not the main focus of the narrative. In short, though the film may feature Earth II, the physical action is solely concerned with Earth.

In one particular sequence, John plays a stunning piece of music for Rhoda using a bow and metal saw. The use of two seemingly unrelated objects to create something otherworldly and beautiful is indicative of the way in which the film intertwines a tragic dramatic narrative with a fascinating science fiction premise. The presence of the new planet enhances the action, as philosophical questioning begins to meld with real life when Rhoda has the opportunity to visit Earth II.

One of the strongest elements of Another Earth is the captivating central performance from Marling. The melancholic tone of the film is carefully preserved by the consistent and tangible inner turmoil which Rhoda clearly suffers from. She is haunted by the past and utterly unable to move forward with her life. Marling offers a subtle performance in which every glance, every gesture, every utterance is imbued with ultimate regret.

Another Earth is not without its flaws. There is an overly romanticised view of John’s family immediately preceding the crash, which detracts from the intended verisimilitude and desired effect of the sequence. Another later key scene feels closer to clumsy exposition than a film of this quality deserves. However, these are as Pluto to our solar system; minuscule and rendered almost irrelevant when presented with the whole intricate picture.

Another Earth is a hauntingly beautiful exploration into grief, guilt and human nature. A stunning melancholic trance of a film which will leave viewers transfixed long after its gripping end.