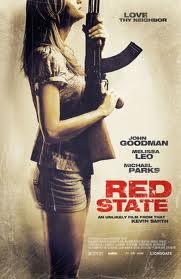 A while back I posted a preview Red State’s (2011) history, writer/director Kevin Smith’s penultimate feature and first shot at horror. I’ve been waiting for it through initial mentions years back, to the last 12 months when Smith’s SModcast network has detailed the film’s fiercely independently-minded production and release. Red State finally opens in the UK on 30 September, and is currently available on Video on Demand.

I’d urge anyone already strongly intent on seeing the film to avoid reading this beforehand. I knew much about Red State before seeing it, and despite liking it, I can’t help but wonder how much more powerful it could have been, had I not seen the trailer, nor heard Smith speaking about it.

Red State opens with three sex-crazed teenage boys all on the search for a woman offering group intercourse. It leads them into the bosom of a community of fanatic Christians so ultra-conservative, even neo-Nazis think leader Abin Cooper (Michael Parks) is insane. What follows is an hour of psychological action-horror satire, with uncomfortable overtones of both the Westboro Baptist Church – who exist within the film – and the 1993 Branch Davidian siege, all in 81 tightly-packed minutes. 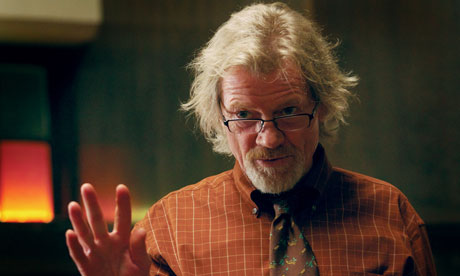 The opening fifteen minutes breeze by in a haze of childish misogyny – so far, so slasher. But the distinct lack of score forms disquiet, and suddenly we’re thrown into a 12-minute sermon from Abin Cooper himself, played with verve and relish by Parks. His monologue is strongly-written and well-performed, exhibiting appropriate knowledge of scripture and an engrossing view on Church service. For those who scorn the self-imposed ‘blindness’ of believers, Smith presents the (background) image of a gagged man strapped to a crucifix. The churchgoers ignore.

The second half of the film introduces John Goodman’s ATF Agent and an investigation into Cooper’s compound, as well as a cacophony of military artillery and raging satire against institutions larger than conservative Christianity. Red State’s second half is a gripping and relentless 70s-inflected exploitation B-movie, giving us exciting ultraviolence alongside intriguing debates – one admires the ambition.

Red State will become available on numerous formats over the next few days and weeks, including DVD, Blu-ray and VOD, all on top of the theatrical release. In emulating his hockey idol Wayne Gretzky’s mantra of “going where the puck’s gonna be, not where it’s been”, Smith has looked to revamp the indie film model.

Red State proves that with presence of mind, diligence and sacrifice (Smith’s View Askew Productions has been selling props and costumes to pay for its future) anyone can get their film seen, and if one seeks an audience, the film must be available as the consumer wants it: hence, VOD and a minuscule cinema-to-DVD/Blu-ray window. On whatever format, Red State remains an ambitious, yet flawed project.