Both Hochhäusler’s observational direction and Kurts’ endlessly watchable portrayal give a strong sense of credibility to the fugitive sex offender. Despite his apparently heinous past misdemeanours, Molesch is shown to be clearly suffering from mental illness, and seems to be far from the violent monster the townsfolk believe him to be. 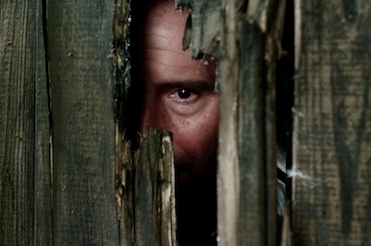 As the systematic manhunt begins, Molesch proves himself to be extremely resourceful, evading detection despite the best efforts of ageing veteran policeman Marcus Kreil (Eberhard Kirchberg). However, as the investigation continues, Kreil begins to have his doubts as to the validity of Molesch’s original conviction.

Easily the most straightforward of the three Dreileben films, Hochhäusler’s effort is a refreshingly told tale of crime and punishment, where black and white, polarised notions of good and evil are suitably replaced by shades of grey.

A fantastically satisfying finale to the Dreileben project, which more than makes up for Dominik Graf’s comparably inferior and somewhat off-topic middle chapter Don’t Follow Me Around, One Minute of Darkness perfectly illustrates the numerous strengths of contemporary German cinema.