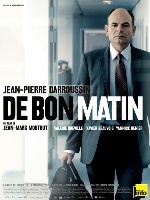 Director Jean-Marc Moutout returns to the BFI London Film Festival with Early One Morning (2011) – starring Jean-Pierre Darroussin, Valérie Dréville and Xavier Beauvois – as he continues his exploration of the insular and alienating world of executive business and showcases a similar degree of visual panache and assured direction.

Darroussin plays Paul Wertret, a long serving account manager for a major French bank, who specialises in corporate contracts. However, his years of dedication to the company now appear meaningless, as his new boss has taken it upon himself to demote Paul as part of a cost-cutting measure undertaken to escape the current recession that continues to cripple the banking industry. As a man who lives solely for his work, Paul struggles to deal with this dejection, and on one calm spring morning he arrives at the office and manifests his repressed fury with the most dramatic and devastating action. 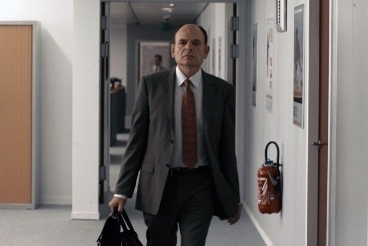 Darroussin’s performance as Paul, a psychologically troubled banker, driven to extreme measures by an unhealthy obsession with his career is fascinating, perfectly capturing the essence of the everyday business man whilst exuding an underlying complexity. With minimal dialogue to work with his role depends heavily on an ability to convey emotion through subtle glances and delicately restrained mannerisms – something masterfully accomplished by this incredibly watchable stalwart of French cinema.

After a startlingly explosive start, Early One Morning’s plot disregards a more conventional, linear approach in exchange for a confusing and often frustratingly fragmented style. Relying on the audience to workout its erratically muddled narrative, it then becomes difficult for the viewer to successfully piece together the events which unfold and ultimately makes it tricky to fully understand the motives behind the drastic actions taken by the film’s protagonist.

Despite featuring some incredibly powerful performances, Early One Morning’s detached mood is hard to become truly engrossed in. Moutout’s decision to open the film with its devastating final act, sadly makes everything which follows nothing more than a narrative jigsaw of mundane incidents and brief encounters which ultimately lack the dramatic punch of their previously exposed conclusion.