This week sees the cinematic rerelease (ahead of its Blu-ray release on 17 Oct) of Jean-Pierre Jeunet’s modern day fairytale Amélie (2001), the film that launched the career of Audrey Tautou in the role of the eponymous Parisian waitress, Amélie Poulain, a Nutella-eyed innocent with puckish charm who was soon gracing the wall of many a student bedsit.

It was also the breakout film for Jeunet who, after a promising start with Delicatessen (1991) and The City of Lost Children (1995) had himself lost his way with the weakest entry in the already faltering Alien franchise, Alien: Resurrection (1997). The strong visual style and surrealist wit which had first made his name were back in abundance, with metamorphosing clouds and errant garden gnomes. 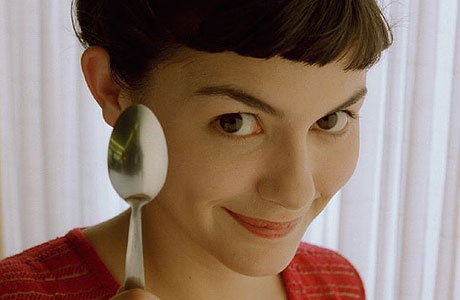 Amélie’s opening hour is a wonderful compilation of crackpot stories that Jeunet had been collecting for much of his career for the purpose of the film. There is a sense of wild invention told with panache, both visually (counting orgasms and what not) as well as aurally with the veteran voice actor Jacques Thébault providing narration and Yann Tiersen’s wonderful soundtrack.

However, past the halfway mark the film begins to run out of steam. The liberating oddness of the stories is traded in for a more conventional narrative of love affair, which is just frankly improbable. Will Amélie trade in her cookie freedom for a shot at romantic love with the gormless Nino Quincampoix (Mathieu Kassovitz)? Do we care? Likewise, the film’s visual character goes from curiously inventive to monotonously dull, even colour correcting the iconic Montmartre into merely a nostalgic postcard.

Yet it seems almost churlish to criticise the film for not maintaining its own high standard of imaginative vigour. Amélie is like a piece of gaudy costume jewellery which, despite its overall enjoyable naffness, contains within it some exquisite gems. The small parts played by Jeunet regulars like Dominique Pinon and Serge Merlin (as the reclusive Mr. Glass) are often the most compelling and imaginative. With so many great fleeting moments, jokes and characters, it’s almost a pity the film had to have a proper story at all.

Amélie will be available to own on Blu-ray from Monday 17 October, 2011.