★★☆☆☆
Messy, disorganised and far from an ideal way to start a film festival – this statement could as easily be applied to the scenes of furious construction currently taking place in London’s Leicester square as it can to the 55th BFI London Film Festival’s Opening Night Gala film, Fernando Meirelles’ 360 (2011), which stars Rachel Weisz, Sir Anthony Hopkins and Jude Law.

Meirelles is undoubtedly best known for his superb 2002 Brazilian gangster epic City of God (although his 2005 film The Constant Gardener received favourable reviews on release), which makes it all the more disappointing that he has produced a film of such little artistic integrity with 360. A clear homage (although clone would perhaps be the correct term) to the winding, parallel narrative structures seen in the films of Mexican director Alejandro González Iñárritu – particularly his globe-trotting 2006 effort Babel – 360 is a film that constantly seems to be searching for the profound, and in doing so neglects to tell an interesting story with believable characters, which is all the more unbelievable when you take into account that the screenplay comes from Peter Morgan. 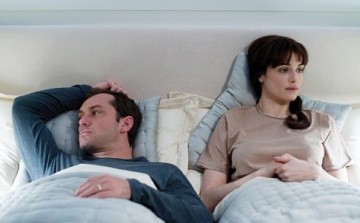 Wildly unbalanced, a number of the various plot strands are given more screen time than others. We begin with two Slovakian sisters in Vienna – one of whom is a newly recruited female escort – who is then requested by Jude Laws’ British businessman. Due to unforeseen circumstances, Law’s character decides not to follow through with their rendezvous and returns to his wife Rose (Weisz) and daughter in London. So begins a web of infidelity, chance encounters and mundane dialogue taking in a number of locales including Paris and Denver International Airport before heading back to Vienna in an elliptical ‘360’ – get it?

Many of Meirelles’ characters and subplots could easily be removed with no visible effect on the film’s overarching narrative (of what little there is). Hopkins has easily the most interesting role as John, a former alcoholic and playboy whose past transgressions lead to the disappearance of his daughter, who he believes may have fled to America. Yet even his contribution to the film is flaky, falling somewhere between naturalism and the kind of scenery-chewing performance we saw earlier this year in Kenneth Branagh’s Thor. The remaining cast members, including Jamel Debbouze, Ben Foster and Moritz Bleibtreu, are given little opportunity to truly shine.

Immediately forgettable and highly disposable, 360 is the clear low-point of Meirelles’ directorial career – a hugely flawed, conceptual piece (derived from Arthur Schitzer’s novel La Ronde), that not even the screenwriting expertise of Peter Morgan was able to save.