Described by its director Kaushik Mukherjee (Q) as a ‘rap musical’ and starring Anubrata Basu and Joyraj Bhattacharjee, Bengali film Asshole (Gandu, 2011) is perhaps the most controversial – and arguably the bravest – selection made by this year’s BFI London Film Festival committee due to its explicit language, graphic drug abuse and scenes of hardcore sex between actors.

Focusing upon disenchanted Kolkata youth Gandu (Basu), the film begins in an almost realist style, depicting his miserable existence alongside his prostitute mother. He makes his money from pickpocketing his mother’s most popular client before splurging out on cannabis and gambling – needless to say, Gandu never wins. 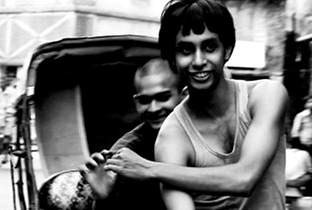 To shield himself from the slings and arrows that his meagre existence throws at him, Gandu descends into Billy Liar-esque flights of fancy, rapping to the camera as if starring in his own music video, his targets feeling the wrath of his razor-sharp lyrics.

Back in the real world, Gandu is literally bumped into be the aptly-named rickshaw driver Rickshaw (Bhattacharya), another down-and-out with a bizarre infatuation with the late Hong Kong martial arts star Bruce Lee. The two seek solace in each other’s company until they eventually descend into hard drug abuse, at which point the film takes an extremely surreal, post modern tangent.

It’s easy to see why an India-wide ban and press walkouts followed initial screenings of Asshole. However, underneath the moral furore lies a highly transgressive, visually spectacular assault on the senses. A mess from start to finish, Asshole nevertheless guarantees a unique ride.