Director Andrei Zvyagintsev broke onto the scene with his remarkably assured 2003 debut The Return, a visually alluring and emotionally engrossing story of two young boys who embark on a road trip with their long lost father. His third feature, Elena (2011), also deals with fraught domestic relationships and is a welcome confirmation that this promising Russian director is worthy of his early praise. Elena (Nadezhda Markina) and Vladimir (Andrey Smirnov) are an elderly married couple who come from very different backgrounds; Vladimir is a wealthy but emotionally numb man, whilst Elena comes from a modest upbringing and believes strongly in the importance of family.

The pair met later in life and both have children from previous marriages. Vladimir’s daughter, Katya (Yelna Lyadova), is a self confessed hedonist, a carefree and careless young woman whose relationship with her father could best be described as distant. Elena’s son is unemployed, married and the father of two children. He lives in a rundown part of town and can barely support his own family, constantly pestering his mother for money. One of these requests is for the money to put his eldest son into college, with Elena knowing full well that his flailing grades currently leave her grandson en-route for a treacherous career in the Russian army. 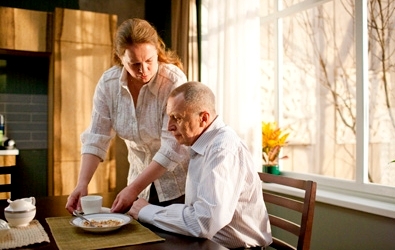 This emotionally-weighted appeal doesn’t sit well with Elena but she asks Vladimir anyway. He’s less than enamoured with her request, firmly of the belief a father should be able to look after his own son, yet reluctantly he agrees to think about it. However, a sudden heart attack lands Vladimir in hospital, with his near death experience forcing him to finally think about his will and how his inheritance will be split between his caring wife and destructive daughter. The decision he makes is a contentious one, leading to an intriguing series of events.

Whilst Zvyagintsev’s previous films were unashamedly reminiscent of Andrei Tarkovsky’s metaphysical approach to domestic drama, Elena is an intelligent insight into the bonds of family that has its own unique identity. The languid and leisurely pace is positively brooding with tension, heightening the fragile relationships which bind all these characters together. These conflicts are beautifully understated, subtle and perfectly enunciated by his delicate direction. In addition, what minimal dialogue there is in the film is fantastically delivered. The few verbal exchanges present are captured with a magnificent sense of realism, with the charming script captures the essence of these brittle relationships, whilst revealing just enough about each character to keep us intrigued.

Enhanced by the lengthy journeys Elena takes from her luxury apartment to her son’s derelict housing estate, Elena is deep down a restrained satirical expose about the wealth divide in Russia. A pitch perfect example of European arthouse cinema, this damming indictment of Russian society is a beautifully captured snap shot of life across the class divide and a vividly hypnotic film.