Chosen as the closing night film at this year’s BFI London Film Festival and starring Rachel Weisz, Simon Russell Beale and Tom Hiddleston, The Deep Blue Sea (2011) marks Terence Davies’ return from a self-imposed, 11-year hiatus, and once again sees this acclaimed British director delve into the crippling effects of romance and the emotionally suffocating constraints of post-war Britain.

Set in 1950s London, the film commences by intruding upon Hester (Weisz) as she downs a handful of pills, switches on the gas and lays herself on the ground of her modest one bedroom flat. We later discover that she has recently left her husband, a high-standing and morally proper judge (Beale), and in doing so given up her life of luxury, all in the name of simple carnal pleasures. Hester has become infatuated with Freddie (Hiddleston), an ex-RAF pilot whose ability to fulfil her primal desires has left her totally besotted. However, after the throws of passion begin to subside, it becomes apparent that Freddie’s feelings for Hestor fail to match her intense emotions, leading to a series of fraught encounters that seem destined to result in an explosive and heartbreaking conclusion.

The Deep Blue Sea is adapted from a 1952 Terence Rattigan play of the same name, a fact which becomes instantly apparent within the first few minutes of watching the film. Indeed, Davies’ film suffers from sticking a little too closely to its period sensibilities and the chamber piece from which its story originates. Feeling all too much like a stage play thrust in front of the camera, The Deep Blue Sea is all too rigid and lacking in the cinematic panache most audiences expect, which coupled with its over-zealous attempts to recreate the dialect and mannerisms of the time, results in a film whose few dramatic set pieces fail to evoke their desired effects and that is sadly unable to connect with a contemporary audience. 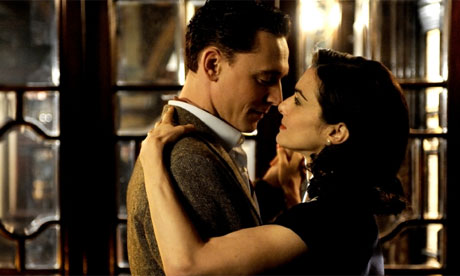 Hiddleston’s performance as the plucky fighter pilot lost without a war to fight is perhaps the most insurmountable obstacle of the film. His hammy portrayal would seem over-the-top in an episode of Goodnight Sweetheart – especially when held up against Weisz’s incredibly nuanced performance. Weisz is indeed the film’s saving grace, her emotionally raw and sensual portrayal of Hestor – a tearful victim of her own desires – is sensational and perhaps her best performance to date, perfectly capturing her characters moral dilemma between what society demands she should do and what she wants.

The scenes between Weisz and the equally impressive Beale are the some of the film’s few highlights, seeming historically accurate whilst completely timeless. Indeed, it’s at these powerful moments that the skills of Davies are clearly at work, using uncomfortably static shots to capture the repressed feelings of these two incredibly troubled characters. Unfortunately, once everyone’s role is explained the film has nowhere to go, with Freddie lacking the emotional depth to feel anything other than anger and Hestor’s descent into depression requiring more than the length of a 90 minute feature to find redemption.

The Deep Blue Sea is a disappointment, feeling all too safe, unadventurous, cold and formal for a director of Davies’ stature. Issues of social acceptability and the crux of hormonal impulses during 1950s Britain are nothing new, leaving The Deep Blue Sea as little more than a showcase of Rachel Weisz’s abilities and an example of why Davies’ had perhaps chosen to remain so secluded for so long.