Film Review: ‘My Week with Marilyn’

Simon Curtis’ My Week with Marilyn (2011) is based on the true story of the uneasy six month production of Sir Laurence Olivier’s The Prince and the Showgirl (1957), and the unlikely friendship that blossomed between Marilyn Monroe (Michelle Williams) and the third assistant director Colin Clark (Eddie Redmayne). A decidedly British affair, the film takes place in England and features a star-studded cast which includes Kenneth Branagh, Judi Dench, Dominic Cooper, Zoë Wanamaker, Emma Watson, Dougray Scott, Toby Jones and Derek Jacobi.

My Week with Marilyn blends two of Clark’s own publications, The Prince, the Showgirl and Me and My Week with Marilyn, beginning as the 23-year-old Clark leaves home in search of a career in the moving pictures. After practically staging a sit-in at Olivier’s office, Clark is awarded the position of third assistant director on The Prince and the Showgirl. High hopes are held for the production, but Olivier’s grand theatrical style struggles to combine with Monroe’s lengthy method acting process, and the two immediately clash. A fraught Monroe seeks comfort with Clark and the pair soon become close. However, it quickly becomes apparent that like Icarus, Clark has flown too close to the bright sun and will inevitably get burned.

As the extensive cast list implies, My Week with Marilyn is first and foremost a performance piece. Although Watson fails to convince, the supporting cast are consistently enjoyable to watch, most notably Dench and Wanamaker. Predictably though, it is Williams and Branagh who steal the show as they succeed with performances which evoke their originals, whilst also managing to avoid caricature. Williams positively sparkles as Monroe, capturing fragility in her depiction of the vivacious icon (a Best Actress Oscar nomination is a distinct possibility), whilst Branagh plays a commanding Olivier with all the weight and theatricality that one would have expected from the man himself. 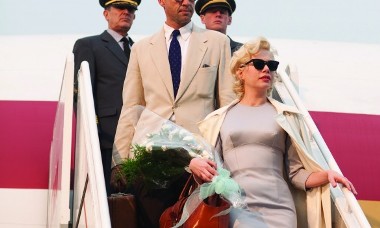 The film is beautifully shot, depicting the English countryside as a magical dreamland for Monroe to explore. The soundtrack carries an effortless charm and adds to the sense of enchantment, as the rich tones of Nat King Cole and Dean Martin coax the audience back to the traditionally romanticised 1950s. However – like Monroe herself – My Week with Marilyn is beautiful, yet fractured.

Unfortunately, the film struggles with the balance between the comic and tragic. Whilst the screenplay often oozes wit and vitality – with Branagh in particular offering up many hilarious moments – it wanes when attempting to portray the more serious aspects of the story, as quieter scenes which depict Monroe as deeply troubled feel too lightly handled and fail to really wrench at the heartstrings.

The main problem with the film lies at the unavoidable heart of its source material. My Week with Marilyn devotes a significant amount of time to exploring its characters’ deep insecurities. From Monroe to Arthur Miller (Scott) and Olivier to Vivian Leigh (Julia Ormond), the film parades beautiful and talented characters in front of the audience before exposing them as mere mortals by revealing the flaws which make them so. Unfortunately, the only character without complexity happens to also be the main character. As the old adage goes, flaws are what make things interesting, but Clark is sadly rather dull and uninspiring. In a film which is full of fascinatingly insecure characters, the central focus on Clark will leave viewers wishing that the spotlight had been elsewhere.

My Week with Marilyn at its best is a frothy, funny and charming depiction of one theatrical great reacting to another. Though it may at times lose its spark due to some fundamental misdirection, it remains a very enjoyable way to revisit a particularly enchanting time.