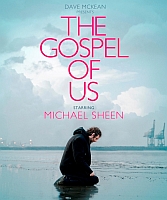 Michael Sheen stars in director David McKean’s The Gospel of Us (2012) – a big screen adaptation of the groundbreaking National Theatre of Wales performance arts play The Passion which took place last Easter in Port Talbot. Consisting of a weekend long staged contemporary re-imagining of the last day’s of Christ, the play also starred Sheen amongst 1000s of locally sourced extras and acted as a celebration of Port Talbot’s close knit community and the resilience of this once prosperous Welsh town.

Distorting the original biblical text to relate to a modern day audience, Sheen plays The Teacher – a softly spoken individual whose disappearance for forty days has left him with no recollection of the town he used to call home. He returns during the Easter celebrations on Port Talbot beach where a suicide bomber has captured the crowds attention by staging a protest against the external influence of the I.C.U – a company masking their ambitions to drain the town of its resources through false charity and financial temptation.

The Teacher manages to prevent the terrorist from detonating his bomb and in doing so attracts copious followers who now see him as a focus point for the resistance. His presence is clearly a threat to the I.C.U who perceive him as a dangerous commodity and soon find a way to use him as an example of their tyrannical control over this small town. 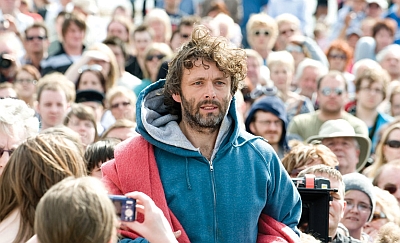 Michael Sheen is renowned for being an accomplished character actor with his realistic portrayals of David Frost, Nigel Clough and Tony Blair winning him some much deserved critical acclaim, however in The Gospel of Us he takes on a far more controversial role in attempting to put a contemporary slant on Jesus Christ. Amongst the myriad of untrained extras Sheen is clearly in a league of his own beautifully expelling both great fragility and humility whilst successfully appearing as a worthy messiah. Sadly his performance isn’t enough to save this well-meaning and incredibly inventive film from becoming an incoherent mess.

The Gospel of Us is an example of how incompatible the language of theatre and cinema can sometime be. With numerous set pieces becoming lost in translation, including a last supper in a working man’s social club and a dance routine amongst the run-down stores of Port Talbot’s shopping centre, The Gospel of Us fails to effectively transfer its elaborate -and at times pretentious – art college theatricals to a cinematic platform.

That isn’t to say the film completely misses the mark and at times this amalgamation of performance art and cinema works beautifully, especially during the film’s crucifixion scene – a remarkably intense and engaging experience that makes the most of its unconventional approach and leading man’s talents. However, these pitch perfect scenes are far more effective at evoking a sense of awe at the grand scale of the production put on by The National Theatre of Wales than they are for their cinematic achievements – culminating in a belief that perhaps a documentary based on the work behind the original play would have been a far more gratifying viewing experience.

The Gospel of Us is a beautifully executed idea that sadly fails to transfer to the big screen. However, McKean’s film deserves to be watched if only to marvel at the performance of Sheen and the epic scale of the production which gave birth to this misguided collaboration of theatre and cinema.