As Steven Soderbergh edges ever closer to his long-foretold retirement from cinema, it seems he is becoming drawn to films about and starring performers used to using their bodies in a more extreme way than most actors. His next film, Magic Mike (2012), is based on Channing Tatum’s real-life experiences as a male stripper; The Girlfriend Experience (2009) starred former adult actress Sasha Grey as an escort. Haywire (2011) star and professional MMA (Mixed Martial Arts) fighter Gina Carano’s day job is less sexual than Tatum or Grey’s past lives, but no less physical, as she shows to great aplomb.

Carano plays Mallory Kane, the best operative working for a private contract company run by her ex-boyfriend Kenneth (Ewan McGregor). Or she did, before someone along the line betrayed her and sent her on the run. Mallory reports the events back to Scott (Michael Angarano), a civilian with the misfortune to intervene in the opening fight between Mallory and Aaron (Tatum), while on her way to discover who set her up. 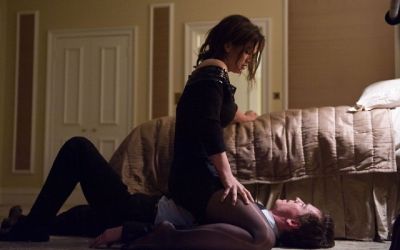 Carano isn’t really an actor, and the script is set up to minimise the amount of dramatic acting she has to deliver. It gives her just enough space to convince as the brusque, no-nonsense Mallory, if not to really give much indication of how far her ability stretches. What Haywire gives a lot of – though perhaps not quite enough of – is Carano using her supreme fighting skills against a bunch of Hollywood A-Listers and looking completely at home doing it.

The digital cinematography by Peter Andrews didn’t look great on the big screen. On DVD, the colours look much more natural, though still occasionally a little too hot under yellow lighting. Haywire isn’t really about style, but an exercise in star performance: the emphasis on Carano’s physical presence is laudable, and Soderbergh’s intent to use his star’s body as a special effect in its own right is rare in Western cinema. Surrounding her with a line-up of established and rising stars was also a sound move: in addition to McGregor and Tatum, the film also includes Michael Douglas as a White House contact, Antonio Banderas as a Spanish government representative, Bill Paxton as Mallory’s father, and Michael Fassbender as an MI6 agent.

Haywire is efficient above all else; sparse in its use of dialogue, and designed to keep its audience up with the turns of the plot. Ultimately it’s that low-key, contained approach that limits Haywire from being more than it is, but it is an often thrilling little film with a big cast and a few subtle things to say about gender and violence.

Win a Blu-ray copy of Haywire with our fantastic new competition. Follow this link for more details.