Austrian director Michael Haneke gives us the first real masterpiece of the 65th Cannes Film Festival with French language effort Amour (Love, 2012), a surprisingly warm meditation on old age and death and undoubtedly a strong contender for the coveted Palme d’Or. His most personal film to date, Amour revolves around a married couple, Anne and Georges (names Haneke uses repeatedly throughout his work), played with intensity and courage by veteran actors Emmanuelle Riva and Jean-Louis Trintignant.

Anne and Georges are both retired piano teachers, growing old together with dignity and humour in a large Parisian apartment. They have a grown-up daughter Eva, played by frequent Haneke collaborator Isabelle Huppert, who is married with two children, one of them an adult. She obviously cares for them, discussing her private life candidly with her father, but she has her own busy music career. In addition to this, Anne and Georges have the satisfaction of seeing one of their students prosper as a famous concert pianist (Amour opens with them attending his Paris concert). 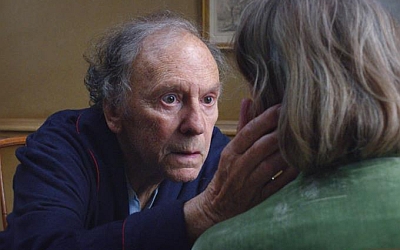 Everything changes, however, when Anne suffers a stroke and begins a remorseless decline in both mental and physical health. She keeps a tenacious hold on her independence, forcing Georges to vow he won’t allow her to be hospitalised. As her condition deteriorates, Georges employs nurses to help and contends with his daughter on how his wife should best be looked after, protecting her even when becomes apparent that she no longer wishes to live.

With subject matter as delicate as this, the stern Haneke might not seem the best director for the task – yet the Austrian master turns out to be perfectly equipped. Never allowing an ounce of false sentiment into Amour, even for a second, his austere aesthetic, formal framing and crystalline intelligence has never been put to better use, giving his actors the opportunity to give magnificent performances in what must have been emotionally and physically challenging roles. This is genuinely nuanced cinema of beauty and intelligence, perfectly balanced and poised. The tragedy and the love of Amour are in its smallest gestures; a hand held; a meal prepared; a chair moved.

Amour is undeniably an unflinching examination of the reality of death and illness, yet Haneke also celebrates life throughout. There is a beautiful moment when Anne looks through an old photo album and comments, “Life is so long” – nothing could be truer in Haneke’s wholly non-ironic, heartfelt portrayal of true love.

Amour is due for release in UK cinemas on 16 November, 2012, courtesy of Artificial Eye.