An contemporary re-telling of Fyodor Dostoevsky’s Crime and Punishment, Darezhan Omirbaev’s Student (2012) paints a grim portrayal of post-Soviet Kazakhstan, with occasional moments of wry, bitter humour. The film follows a poor, unnamed philosophy student who lives in the basement flat of an old lady’s house, with barely enough money to do anything other than walk to the local shop and purchase bread. The Kazakh capital of Almaty is a place where credit is asked for and never given, as the people are surveyed by the protruding eyes of the shopkeepers, appraising them with detached indifference.

Pensioners and the young struggle, while at university the student is being taught that oligarchs and millionaires are something to be proud of, rather than criticise. Socialism and equal rights have failed, the boy is told. Capitalism is the way forward – the ruthless, lawless and unrestrained survival of the fittest. When a friend of his accidentally spills a drink on the girlfriend of a big shot hood, he is beaten to the ground as they look on in guilty silence. In response, the student in response acquires a gun and three bullets and then mounts a spectacularly inept robbery which turns into a double homicide. Racked by guilt at what he has done, he awaits a punishment that seems tardy in arriving. 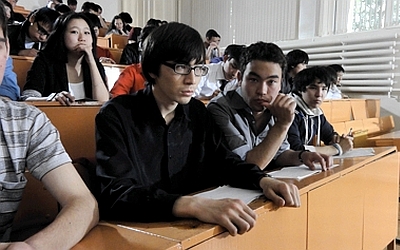 Part of the problem with Omirbaev’s Student is that Dostoevsky’s protagonist Raskolnikov was a charismatic, Hamlet-like figure, whereas our new lead is more a blank-faced, gormless prop. The sympathy we ought to feel at his plight is absent and the humour quickly becomes repetitive: the television always seems to be showing the same programmes, which ironically echo the action of the film. Production values are suitably, and perhaps necessarily low, and the actors mostly ‘perform’ as if they have been found rather than cast.

It is interesting to see a part of the world beginning to find its voice, especially one that is best known for being mercilessly lampooned by Sacha Baron Cohen’s Borat (2006), and the film certainly doesn’t lack for ambition in its choice of source material (although the Russian influence appears inescapable). Yet it ultimately seems unlikely that Omirbaev’s Student will find much of an audience outside of its host country and the festival circuit.