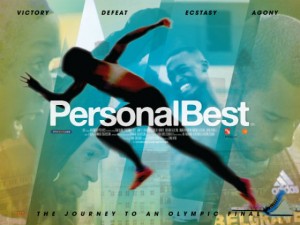 Not to be confused with the 1982 romantic drama, Sam Blair’s Personal Best (2012) is a BFI-supported documentary sharing the stories of three professional runners aiming towards competing in the 2012 London Olympics. What Personal Best lacks in fictional tales of love and friendship, it makes up for in real-life, gripping drama as the three hard players fight opposing factors to achieve their sporting dreams.

Director Blair began filming his subject, James Ellington, Jeanette Kwakye, Richard Alleyne and others, in 2007, and as satisfying as it is to see their efforts pay off, the main draw of the film is tuning in to their agony and desperation as they become involved in individual dramas ranging from injury to life’s trials and tribulations. Moments of victory and celebration are short-lived as the fear of being discarded by cutthroat sponsors kicks in – pretty much as soon as they cross the finish line. Losing a medal by even 0.4 seconds can mean bad business in professional sprinting, and as Ellington darkly jokes “It could always be back to Job Centre James tomorrow.” 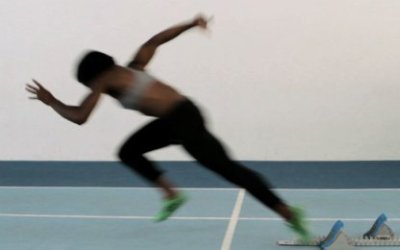 With the film dedicated to the youth of Great Britain, its message is one of inspiration, ardent determination and radical self-belief; an all in all apt story of encouragement and support for a nation currently blighted with youth unemployment. Aside from this comment on a national problem,  Personal Best remains focused on the personal stories of how contrasting failure and success makes the runners feel, and how their pressure to perform sometimes governs their entire lives, especially in the build up to an important race.

Injury often rears its ugly head, ruining progress at crucial moments, meaning lost sponsorship deals and the gloom of months or years in recovery. Unmentioned in the film is Ellington’s alleged self-auction on eBay – documented by tabloids last December but subsequently revealed to be a hoax – in an otherwise funny, honest and eye-opening portrait of individuals both celebrated and punished for their unique talent.

Sprints are shot at high-frame speed to stunning effect; the images of straining muscles, astonishing poise and otherworldly speed make for beautiful scenes almost depicting scientific diagrams. Personal Best’s cinematography is consistently precise and shows the intimate detail of the competitors passion and struggle so closely you can almost feel the lactic acid. Blair’s film is intentionally left open ended as, on the eve of the London Olympics, the runners train to the limit and nervously wait to see if they qualify.