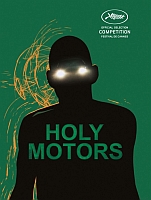 French-born director Leos Carax returns to cinema screens this year with Holy Motors (2012), his first feature film for over a decade (since 1999’s Pola X ), which premiered at the 65th Cannes Film Festival and has since become somewhat of a late favourite for the prestigious Palme d’Or prize. It’s a truly bizarre, thoughtful, pretentious and insane circus of a film, but somehow gets away with it all by being so consistently, utterly entertaining.

Carax’s latest stars regular ‘partner in crime’ Denis Lavant as Monsieur Oscar, who is picked up in a stretch limo first thing in the morning by a thin, elderly blonde driver Celine (Edith Scob), is taken around the city and assumes a variety of roles which he consequently plays out for an invisible audience. The whole limo is a kind of dressing room as M. Oscar prepares himself with meticulous attention to detail, transforming from a respectable banker into a motion capture artist (like some kind of demented Andy Serkis) engaged in martial arts and then alien pornography, to a concerned father picking his daughter up from a party. One of the most outstanding sequences introduces a character called Monsieur Merde, a subterranean leprechaun who eats flowers and gabbles in his own language, kidnapping a passive Eva Mendes (as Katy M.) from a fashion shoot, to the delight of one photographer: “He’s so weird”. 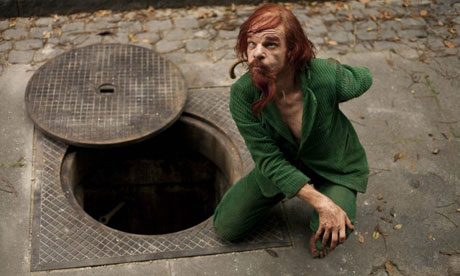 Holy Motors is inevitably episodic but thankfully never lags, driven on by Carax’s frankly bonkers imagination and a creative free-for-all, the director seizing his opportunity in an all-or-nothing creative gesture. Carax packs the film with jokes – the gravestones in the cemetery read ‘Visit my site at www.vernon.com‘ – and he uses musical set pieces to great effect. There is even a song from Australian popstress Kylie Minogue, who plays a female counterpart to M. Oscar and a scene-stealing accordion piece by none other than M. Oscar during a wittily-inserted interval.

There’s than enough ambiguity and self-reflexivity here to keep critics discussing Holy Motors for years to come – at one point M. Oscar has more than a passing resemblance to shock haired-word-bender Jacques Derrida – but its most obvious frame of reference would be to cinema itself, and the relationship between art and real life. M. Oscar spends his life playing roles, even inhabiting both the hitman and the mark, and alongside the despair at never fixing on a true self, there is an obvious revelling in the anarchy and freedom, the madness and the method that goes with the façade of acting.

Whether the intellectual substance of Carax’s latest mind-fuck has heft is open to interpretation, and there has been a lot of naked emperor spotting – Holy Motors is arguably more Monty Python than Immanuel Kant, a stretch limo rather than a Volkswagen. It projects fun, weirdness and occasionally even style, all of it held up by a magnificent central performance – or more accurately, several magnificent performances – by Lavant. When asked if Carax would have made the movie if Levant had refused the role, Carax said he would – but only if he could have cast Charlie Chaplin in his place.