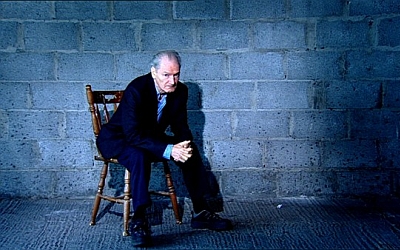 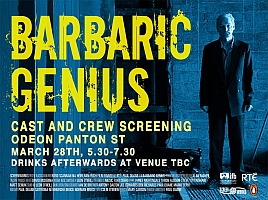 Writer and director Paul Duane turns his hand to feature documentaries with Barbaric Genius (2011), which examines the ‘colourful’ life of ex-con turned author John Healy. Born in Ireland, Healy grew up with an abusive father in a small town, later joining the army only to desert and become a homeless alcoholic in London.

After years on the street, Healy was imprisoned for a petty crime, during which time he met Harry ‘The Fox’ Collins, a burglar from Brighton with a talent for chess. Collins taught him the game, and after being released Healy went on to play in over ten international chess matches before writing an autobiography entitled The Grass Arena which was published by Faber and gained praise from the literary elite, including Harold Pinter.

The book went on to be made into a TV series in 1991 featuring the late Pete Postlethwaite, and met with some success – yet it did not last long. After an argument with publisher Robert McCrum where Healy threatened to kill members of the publishing house, the book was withdrawn and pulped. It is from this point that Duane’s documentary picks up the thread.

Much of Barbaric Genius explores how Healy felt he was treated by the publishers and his difficulties with the middle classes. Whilst this is a fascinating story, the documentary itself is very much flawed. Duane has stated that he became friends with the author during the making of the film, and this has resulted in its frank honesty, mixed with respect. Disappointingly though, much of Healy’s story has been avoided due to the fact he was not comfortable talking about certain issues. Add to this his clear fear of the camera and the result is a fragmented narrative and structure.

Healy is undoubtedly a talented man who has suffered a great deal, however, the films overall structure and a number of holes in the story tremendously weaken Duane’s documentary. Despite Barbaric Genius’ fascinating subject matter, it fails to captivate due to its sometimes simplistic approach and the fact that it fails to fully engage with Healy’s life.