Written and directed by Ryan O’Nan (who also stars as hapless lead Alex), The Brooklyn Brothers Beat the Best (2011) is a twee and ultimately redundant American indie that aims for a Flight of the Conchords-style blend of music, pathos and humour – minus the ingenuity and laughs. Taking a fairly rudimentary road movie structure, we follow the rags-to-partial riches-to-rags tale of a twenty-something, struggling musician with aspirations frankly above his station.

Out of work, out of love and kicked out of his two-piece band, singer-songwriter Alex pairs up with fellow down-and-out Jim (Michael Weston), as the duo make their way cross-country to a prestigious Battle of the Bands context in Los Angeles. Playing under the name of The Brooklyn Brothers, Alex and Jim meet with minor success, mostly thanks to the help of entrepreneurial love interest Cassidy (Arielle Kebbel). However, after an unfortunate series of events, Alex is forced back home to his family home in San Diego, now half-owned by his Christian older brother, Brian (Andrew McCarthy). 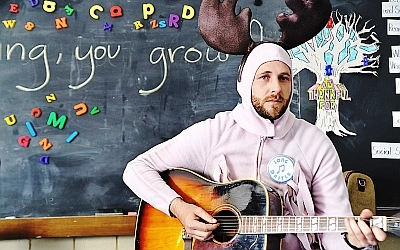 Whilst not as appalling as perhaps may have been anticipated (music-related indies are often crippled by mawkishness and left dated by overt references to ‘hot’ current bands), The Brooklyn Brothers Beat the Best is still rendered a mostly joyless slog due to its lame attempts at humour and downright amateurish songs. The aforementioned Flight of the Conchords has enjoyed remarkable success thanks to its well-written script and catchy hooks – O’Nan’s film, unfortunately, has neither. This is very much your American independent feature-by committee, with even its free-spirited didactic weak and derisory.

Performances all-round are also markedly hum-drum, and quite why O’Nan chose cinema over television as his platform of choice is anyone’s guess. Stripped down and serialised, his pet project could have been a charming and affable BBC Three/E4 launch pad, but instead looks wildly undersized and under-developed for life on the big screen. Like a startled rabbit-in-the-headlights, O’Nan’s tragic hero Alex is similarly meek and hard to warm to.

Tame, televisual and too lackadaisical to effectively occupy your time (or thoughts), a sit-through The Brooklyn Brothers Beat the Best comes second best to popping on that Flight of Conchords DVD gathering dust on your shelf – or even attending a local open mic night – and sadly falls as flat as its musical duo’s uninspiring harmonies.