The Dark Knight Rises (2012), the long-awaited climax to Christopher Nolan’s Batman trilogy was always guaranteed to be huge at the box-office. If you caught Batman Begins (2005) and The Dark Knight (2008), then only a masochist would resist the temptation to see how it all pans out. Most critics will sing its praises, whilst some will attempt to court controversy. Yet no film is without fault. There are parts of Nolan’s latest that smack of rushed editing, a scene between two of the characters is shoe-horned in order to manufacture a romance and the climax is not as surprising as it thinks it is.

If this was your average Hollywood blockbuster then the issues would be more than glaring but here, they are mere scattered raindrops on a hot summers day. The Dark Knight Rises is the pinnacle of epic movie-making and its scale and grandeur are unprecedented in cinema history. Nolan’s biggest achievement – and the real star of his third Batman film – is Gotham city itself. From the back alleys to the main drag, the sewers to the rooftops, Gotham is a living, breathing metropolis perfectly realised and utterly believable. The cinematography – especially watched via IMAX – is, at times, nothing short of breathtaking, with Christopher Nolan embracing his inner-Spielberg and bettering anything the old master has produced thus far. 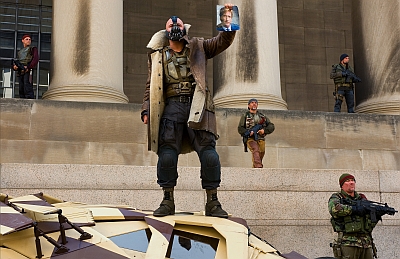 As for the cast, this is undeniably Christian Bale’s best outing as the Caped Crusader. Gone is the brash, vengeful young man replaced by a weary, battered recluse – yet with age, it seems, comes a sense of humour. There are also some great comedic moments and this lighter touch makes you wonder if Nolan asked himself “Why so serious?” after The Dark Knight’s black and moody tone.

Any comparisons made between Tom Hardy’s towering terrorist Bane and the late Heath Ledger’s masterful portrayal of The Joker are unfair and best ignored. These are two very different beasts and the physical threat of Bane provides Batman with a worthy foe, capable of beating him with both his brains and his brawn. Yet of all the lead characters introduced (and re-introduced), it is Anne Hathaway’s Catwoman that shines the brightest. Her physicality, sexual allure and dead-pan quips make for a fun and provocative character, and if there is still anyone out there who still thinks Hathaway isn’t one of the great female actors currently plying their trade, then this role proves it beyond doubt.

For its lofty ambition alone, The Dark Knight Rises should be lauded and applauded. It’s not quite perfect, but it’s damn near close, the only real downside being that this will reportedly be the last Batman film with Nolan at the helm. It will certainly take a director with Bane-sized balls to breathe new life into the old Bat from here on in.