Australian director Daniel Nettheim adapts fellow countryman Julia Leigh’s philosophical thriller The Hunter (2011), in what is a compelling, if flawed, debut feature. Gun-for-hire Martin (Willem Dafoe) is sent to the wilds of Tasmania by a mysterious European biotech firm to hunt the presumed-extinct thylacine, or Tasmanian tiger. Taken in by a grieving widow and her two children, Martin begins to question his employer’s motives, and also those of his local guide Jack (Sam Neill).

Whilst the film’s marketing and trailer present The Hunter as a ‘compelling mystery-thriller’, its real strength lies in its philosophical exploration of multiple interweaving themes. Nettheim’s debut has a great deal going on, but central throughout is the story of a man struggling with his beliefs and lifestyle, juxtaposed with the fatherless family that he resides with. 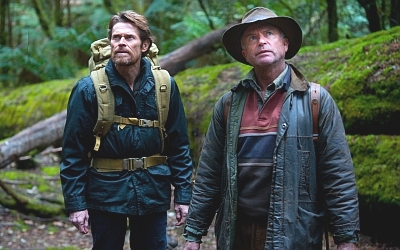 The beautiful Tasmanian backdrop has been expertly captured by cinematographer Robert Humphrey, who shoots the prehistoric landscape with a hypnotically bleak, haunting quality. This approach gives the overarching narrative a timeless nature, consistently drawing you into the story of one solitary hunter stalking the landscape of history, whilst struggling with his own purpose and identity. Such an approach demonstrates just how well Nettheim understands the language of cinema, exploring the existential crisis of the central character visually and with very sparse dialogue.

At the heart of The Hunter is the lean and drawn Dafoe, exceptionally well-cast as Martin and able to deftly capture the character’s emotional complexity (with the assistance, at one point, of Bruce Springsteen’s I’m on Fire). The scenes set in the Tasmanian wilderness as Martin tracks his prey speak quietly but poignantly. Although very much the grizzled hunter, Martin is a man of dysfunctional emotions, and the true rewards of the film are to be found in his emotional development.

Nettheim’s inaugural outing is no generic thriller (despite its promotion), but instead a thoughtful exploration of masculinity. At times, Nettheim is perhaps overly-ambitious in precisely how many themes he attempts to capture, yet his debut’s raw power to evoke an emotional response from its audience swiftly makes up for this problem. The Hunter may not be a gripping rollercoaster ride, but it’s certainly a powerful, evocative and intelligent exploration of the complexity of masculine identity, set amidst a remote and ancient landscape.