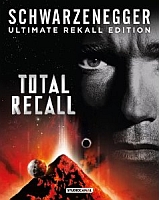 With Len Wiseman’s Total Recall (2012) remake due to hit screens this August, StudioCanal’s cinematic rerelease of Paul Verhoeven’s original adaptation of the Philip K. Dick short story We Can Remember It For You Wholesale couldn’t be more timely. Dissatisfied with his blue collar existence and plagued by mysterious dreams of a past life on Mars, construction worker Douglas Quaid (Arnold Schwarzenegger) decides to pay a visit to the mysterious ‘Rekall’.

Rekall is a company that specialise in implanting false memories of your wildest desires into an individual’s brain, sending your mind off on a virtual vacation. Lo-and-behold, it turns out that Quaid has already undergone the procedure and was formerly a man called ‘Hauser’, one of the chief enforcers for the Mars Intelligence agency who had his mind wiped by his boss the villainous Vilos Cohaggen (Ronny Cox). 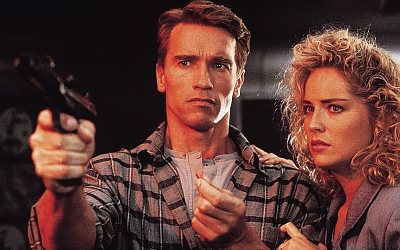 Set in 2084, Verhoeven follows the same template as his previous film – the never-bettered sci-fi classic RoboCop (1987). The technology is more abundant, as are the special effects, but the future world of Total Recall is just as gritty and grimy as RoboCop’s Delta City. The human race might have some new gadgets and be able to colonize planets, but the age-old problems of crime, violence and degeneracy persist. As Verhoeven’s future vision is not far removed from modernity, both the 1990 Recall and RoboCop have aged very well indeed.

The other Verhoeven masterstroke is to pit his amnesiac hero against some credible opposition. Ronny Cox and Kurtwood Smith excel as the bad guys in Robocop and Cox (playing practically the same character) is equally good in Recall, along with Michael Ironside as his evil henchman Richter. In the central role, Schwarzenegger does what he does best – deadpan dialogue delivery – but also shows a rare vulnerability, which the terminally-confused Quaid requires. Sharon Stone’s brief turn as the duplicitous blonde wife shows her on the cusp of Basic Instinct (1992) notoriety and Rachel Ticotin, always underused by filmmakers, makes for a fine leading lady.

Like Quaid, some audience members may be confused at points as to exactly what’s happening, who is who and where their allegiances should lie – but that’s kind of the point. In addition, whilst the romance between Quaid and Melina doesn’t exactly set the screen alight, there is enough chemistry between the two to convince you that they have each other’s back.

When push comes to shove, Total Recall is little more than a high budget B-movie, but with both Verhoeven and Schwarzenegger at the peak of their powers the cocktail is pretty irresistible. It’s certainly well worth viewing this late night TV favourite on the big screen, if only for a limited period.