In one of her performance pieces, Serbian artist Marina Abramović lies totally naked, having eaten a kilo of honey and drunk a litre of wine. She carves a pentagram onto her stomach with a razor, and then lies bleeding on a cross made of ice for half an hour. For an artist who has rarely, if ever, played it safe, Matthew Akers’ Marina Abramović: The Artist Is Present (2012) takes a fairly conventional documentary form which celebrates her incredible work without seeking to challenge it, in a manner quite unlike her art.

The Artist Is Present takes its name from the 2010 MOMA retrospective of the Serbian ‘grandmother of performance art’. The first time that MOMA had staged a full-scale retrospective for a performance artist, this was a 90 day exhibition in which Abramović  decided that she would sit – without food, water, toilet breaks or conversation – in a wooden chair in a room in a gallery and look into the eyes of every visitor who chose to come into the gallery. The physical effect of sitting on a chair without moving, 8 hours a day for 3 months, begins to take its toll on Abramović. Akers follows Marina’s journey throughout the retrospective, as well as looking back on her life and work. 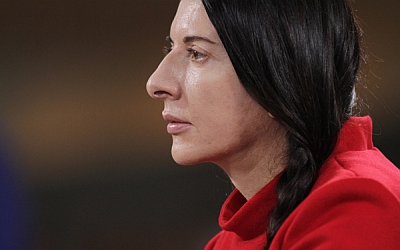 Akers’ direction comes into its own, however, in a number of ways. Firstly, the sheer amount of access which he always able to gain from Abramović is impressive. We see her in her office, putting on make-up, even floating naked in the bath; Akers is even more comprehensive when it comes to footage of ‘The Artist Is Present’ performance. Thousands and thousands of faces are filmed flitting in and out, locked in a gaze with Abramović. We see famous people – Orlando Bloom and James Franco – children and people with wildly differing characteristics and responses. The alternating footage between people’s faces is incredible; their emotions clearly visible. Akers really lays on the footage, intensifying the feel of Marina’s gaze so that you too are drawn into the hypnosis.

Akers clearly conducted extensive, extended interviews with  Abramović  and later the German performance artist Frank Uwe Laysiepen (known as Ulay). It is Marina’s long creative and romantic relationship with Ulay which is the most moving element of the film. Abramović met Ulay in 1975 and they quickly engaged in an intense union, at one point living in an old caravan and cooking and clothing themselves in the wilderness, as well as creating radical often violent performance pieces that looked at the dynamics of male/female relationships. In 1988, Marina and Ulay decided that they would separately walk the Great Wall of China, with Ulay starting in the Gobi desert and Abramović in the Yellow Sea, and meet together in the middle.

Akers also draws out glimpses into her family life, and questions are raised about why her work has been so extreme, and her work ethic so disciplined (Her parents were anti-fascist partisans who fought alongside future president of Yugoslavian, Josip Broz Tito; they were incredibly strict).

Marina Abramović: The Artist Is Present is a creative film with a fascinating central subject. However, for someone of such a boundary-pushing background as Abramović, the film would have better suited her with a more radical framework.